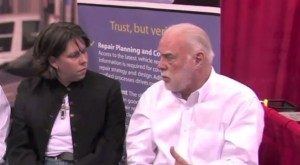 Collision repair hall of famer Dale Delmege has died, his family announced in an email earlier this week.

Delmege, a 2001 inductee into the Hall of Eagles and a lifetime member of the Society of Collision Repair Specialists, died Sunday at home.

“During Dale’s 30 year involvement and contribution to the collision industry, he brought an unparalleled amount of wit, wisdom and insight to countless number of people within every segment of the industry. As an inductee into the industries Hall of Eagles and past Collision Industry Conference Chairmen, Dale worked passionately to offer an unprecedented amount of foresight, acumen and guidance to the industry as a whole,” the Delmege family said in a statement.

This “wit, wisdom and insight” can be seen here in his columns for the Auto Body Repair Network meant to help owners decide whether to open a second collision repair shop.

He can also be seen (at right) in this 2011 Collision Hub video:

“As a revered conversationalist and story-teller, Dale’s wit and wisdom was sought out and treasured by all who knew him, the family’s statement continues. “Having traveled the world, serving in the United States Navy and experiencing an astonishing number of true life events, Dale had the rare ability to give anyone an expanded perspective on nearly every subject matter. He was a poet, a musician, an actor, an artist and a rare individual who enriched all of our lives.”

In lieu of flowers, Delmege had asked that donations be given to the Children’s Skin Disease Foundation.

Featured image: This screenshot from a list of VeriFacts Automotive event speakers shows the late Dale Delmege. (Screenshot from www.verifactsauto.com)