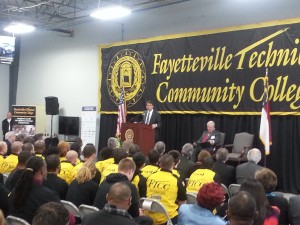 An NPR report earlier this month suggests some young Americans serious about their future should skip a four-year university for a two-year trade school.

That’s an encouraging sign for the collision repair industry, which is confronted by increasingly complicated vehicles and a workforce believed to be too small to meet future demand.

“In fact, millions of good-paying jobs are opening up in the trades. And some pay better than what the average college graduate makes,” states the NPR report, based off of an “All Things Considered” broadcast by Chris Arnold.

True, unemployment is nearly doubled for those without a four-year degree, and the money is typically less, according to NPR. But think about what that latter stat really means. A sample size of everyone without a four-year degree includes both your highest-paid technician and the guy who sold him his fast-food burger at your shop’s lunch break, Georgetown Center on Education and the Workforce Director Anthony Carnevale pointed out to the network.

He gave NPR the example of an electrician, who on average is paid $5,000 more than a college graduate.

And while nobody is falling all over themselves to hire a B.A. in art history, there’s a great deal of interest in tradespeople — particularly as baby boomers retire, he said.

One of the reasons for the lack of skilled trade workers has to do with how the U.S. handled education, Carnevale told NPR.

The “A Nation At Risk” report in 1983 scared America by pointing out how bad our schools were doing, he said.

“If an unfriendly foreign power had attempted to impose on America the mediocre educational performance that exists today, we might well have viewed it as an act of war,” its introduction states.

But despite the report also pointing out “Technology is radically transforming a host of other occupations. They include … the building, repair, and maintenance of sophisticated scientific, educational, military, and industrial equipment,” American parents and high schools focused on four-year education as the goal, Carnevale told NPR.

“We basically obliterated the modernization of the old vocational education programs and they’ve been set aside,” Carnevale said.

He felt that vo-tech should return to high schools, and high schools and community colleges should partner with businesses better. Considering that the guy works for a university, that’s saying something.

Here’s Mike Rowe of “Dirty Jobs” talking about the same topic for SkillsUSA:

The “All Things Considered” piece can also be listened to here if you don’t feel like reading the accompanying article (but take note of the correction on that website).