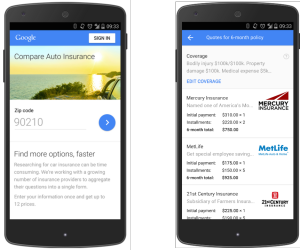 Google confirmed what had already been speculated: It’s getting into the car insurance price comparison business in America.

In a post on the Google “Inside AdWords” blog Thursday, AdWords Vice President Jerry Dischler said that Google Compare would be available in California.

The product, which lets drivers comparison-shop insurance for their autos in a fashion similar to travel sites like Expedia, already existed in Britain.

“Whether you’re a national insurance provider or one local to California, people searching for car insurance on their phone or computer can find you along with an apples-to-apples comparison of other providers — all in as little as 5 minutes,” Dischler wrote. “You can highlight what makes your business unique, whether that’s an ‘A’ rating in customer service or better discounts for safe drivers.”

Dischler wrote that Google research found that 80 percent of drivers think comparing more than two providers could yield a better policy. (We hope they didn’t pay too much for that common-sense research.)

The product will include ratings and reviews and local support when it expands to more state.

Participating insurers will pay Google “a flexible cost-per-acquisition (CPA) model, but payment isn’t a factor in ranking or eligibility,” Dischler wrote. That’s kind of how its ads work — companies owe Google whenever someone clicks on them.

It touts quotes from two partners — but intriguingly, none of the Big 4 (State Farm, Geico, Allstate, Progressive, in that market share order). None of them are on the Google Compare website, either.

“We’re always looking for opportunities to use new technology to enhance the customer experience,” MetLife Executive Vice President Kishore Ponnavolu said in a statement. “Partnering with Google Compare allows us to bring our unique group pricing and benefits to a wider range of customers, while creating an easier shopping experience.”

“The lifeblood of Mercury’s business has and always will be our partnership with independent agents,” Mercury advertising director Erik Thompson said in a statement. We also know many shoppers want to buy anytime, anywhere, and Google Compare gives them a fast, easy way to do so. Partnering with Google Compare provides us with a tremendous opportunity to connect with a segment of the market that would have been out of reach.”

Insurers can sign up here. Everyone else can check out Google Compare in California here. (In a nice throwback gag, the sample ZIP code is “90210.”)

For collision repairers — and probably for insurers too, especially human agents — the move could be trouble.

A screenshot of the Google Compare site. (From www.google.co.uk/compare)

What it could mean

Drivers with high-deductible, low-coverage policies mean less business for shops as customers’ damage grows uncovered and they opt to avoid repairs within those higher deductibles.

Byteback Group managing director Jon Parker gave a bleak picture in an April 2014 FenderBender column of what Google Compare and its competitors have wrought in the U.K.:

“Fewer people will claim when they have a collision because they suddenly realize that they have a $1,500 deductible, and it’s unaffordable. This means fewer repairs being carried out. The smaller, more profitable work is being taken away, and the statistics we witness show annual claims percentages down in about five years from 14 percent to just 8 percent—almost half of the work being repaired under the (direct repair program) model.”

Sixty-five percent of insurance is bought through these sites in the U.K., Parker wrote in April 2014, and premiums fell 40 percent. That hits the wallet of the insurers, which respond.

“This typically means significant internal staff culling and, inevitably, a squeeze on the supply chain—that’s you,” Parker wrote.

In addition to yielding lower billable charges to insurers, the comparision sites caused British insurers to take more of an interest in the repair process itself, Parker wrote. Repairers must therefore add more front-office staff or hours to interact with the insurers, according to Parker.

Having a policy with slimmed down coverage and a high deductible might save you money in the short term and meet the state minimum, but those savings could end up vaporizing if something happens to your car and it’s all out-of-pocket for you. If you don’t have much money, coming up with $1,500 to meet the deductible could be a bigger problem than paying a little more each month for a lower deductible.

The other issue is that you might not understand what you’ve actually bought. Unlike an airline seat or an item on Google Shopping, an insurance policy is inherently personal — taking into effect what you’ve done, what the insurer thinks you’re going to do, and what you and they think might happen to you. And that doesn’t event get into the insurer’s broader business strategy (advertising, customer service costs, etc.) besides its actuarial risk models.

Picking a $120/month policy from one company compared to a $130 one at another might give you a wildly different experience and lead to frustrating situations for both you and your mechanic as you discover what you thought was covered wasn’t.

Featured image: In a post on the Google “Inside AdWords” blog Thursday, AdWords Vice President Jerry Dischler said that Google Compare would be available in California. (Provided by Google)