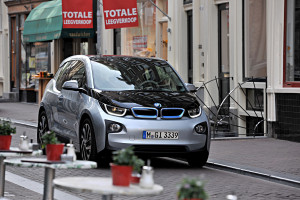 Experts in two recent forums — ironically both offered by Automotive Megatrends USA — gave wildly different appraisals of carbon fiber’s potential in analyses of the BMW i3 and the material itself.

At the actual Megatrends conference last week in Dearborn, Mich., experts dismissed it as too expensive compared to high-strength steels and aluminum for use in bodies-in-white.

But two executives with Munro and Associates, whose company disassembled a BMW i3 RX down to the ball bearings (and is regularly contracted to do these teardowns for the industry), were blown away by the car’s engineering and implications, presenting their findings in a webinar Wednesday. See the webinar here.

CEO Sandy Munro called the car a “paradigm shift” and a “watershed” that would have “as much impact as the Model T.”

Whether carbon fiber catches on or not has obvious implications for collision repair.

Carbon fiber, which is actually a mix of carbon fiber and polymers, is really, really strong — possibly meaning less damage to fix — and complex, meaning you can’t manipulate it they way you can with other materials. Instead, fixing a carbon fiber vehicle like the i3 means cutting away parts of the “life module” body at predetermined parts — they’re even marked, according to Munro senior associate Mark Ellis — and gluing a new section back in there, experts at both seemed to agree.

However, you can also fill in minor dents with other carbon fiber composite or resin and sand it flush, Continental Structural CEO Frank Marcher said at Megatrends.

Ellis estimated very few shops, perhaps a single one, knew how to repair the vehicle (in fairness, it isn’t a high-production vehicle and is mostly available in Europe). But Munro CEO Sandy Munro, who said he coincidentally had the repair manual on his desk, said it could actually be very simple (presumably with the right training and equipment).

He estimated that 90 percent of the vehicle repairs aren’t too difficult, about 9 percent get more involved, and a “very small percentage … might require some modifications to the carbon fiber.”

Of course, the carbon-fiber cost factor does come in to play with the pieces itself, so the ease of the segmented, “repair-and-replace” design could be offset by the price of the new body segments.

Munro also noted that the i3 held up well in European crash tests, even with “narrow-offset” impacts, and would likely get the same high marks in the U.S.

The BMW life module is about 90 percent carbon fiber and 10 percent other materials, Munro and Associates found, calling it the “body-on-black.”

It’s made up of nine preformed parts molded into a single structure, and the roof panel is made out of recycled scraps from creating the body. (The company says don’t count on a sunroof any time soon.)

Ellis said it appeared to be a “testbed” for how to reuse materials ahead of European Union requirements on recycling.

The body itself is glued to an aluminum frame and aligned simply two pins.

Ellis said he was “suspicious of structural adhesives” until the company tried to tear the body off of the frame. Ultimately, they had to vibrationally cut through the epoxy. Munro said it took the company a week.

“I was amazed at how strong those joints were,” Ellis said. He said he’d trust the adhesive more than spot welds.

Ellis also singled out as noteworthy the floor pan made of aluminum — not plastic or carbon fiber as other OEMs are considering — held by overlapping carbon fiber panels. Adhesive between them removes the concerns of galvanic corrosion and also cuts down on noise. 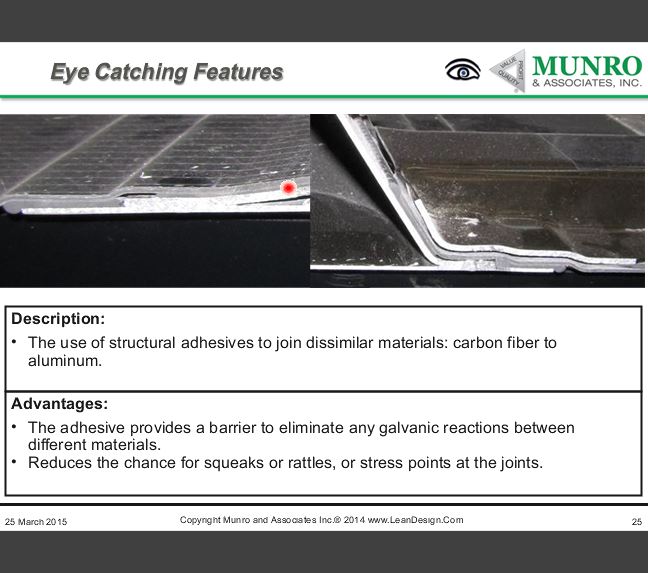 Munro was “very impressed” that BMW could pull this “groundbreaking” joining off, noting that aluminum’s expansion contrasted with carbon fiber’s lack of it seemed to make it impossible.

“No one I know of has been able to make this work,” he said.

Ellis and Munro were also amazed by BMW’s MIG-welding of a die-cast aluminum suspension to an extruded aluminum frame.

While Audi uses similar welds in the A8 and A2, it’s not to this extent, according to the presentation.

“The die casting must have a low gas content,” the presentation states.

Mark called it surprising that one of the “most critical stress points” is connected like this and was impressed by the lack of any flaws such as “gashes” or “bubbles.”

It probably required a lot of engineering thought and aluminum hardness “very, very close to each other.”

Munro said that if someone told him this would have been done with the frame, “I would have just started laughing or walked away.”

“This would chop a lot of cost out of R&D,” Munro said. “Knowing how this was done.” 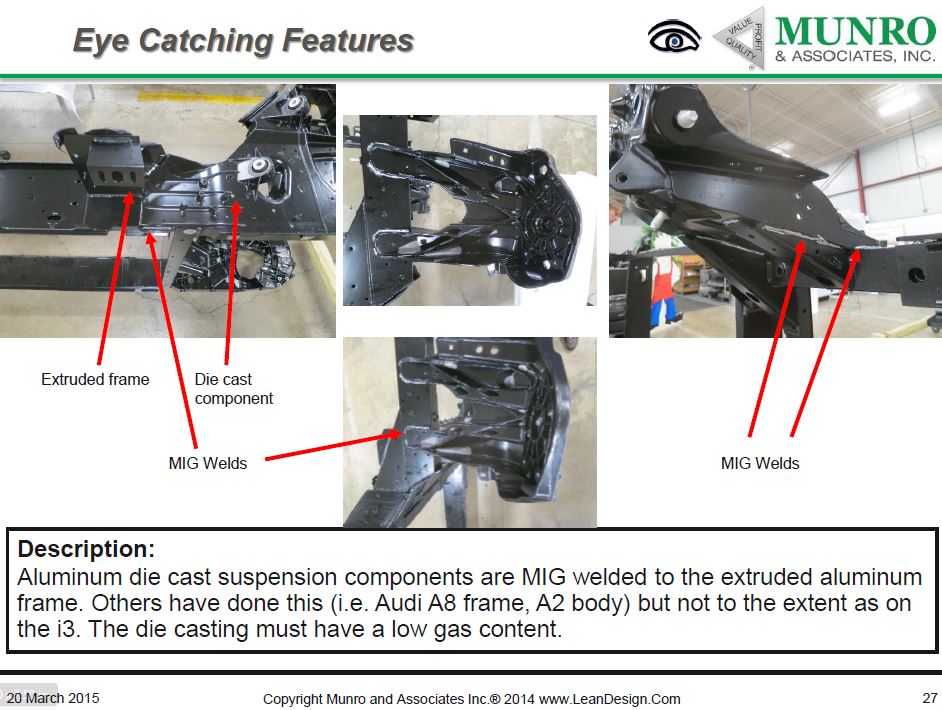 Ellis also observed experts on gaps and openings called the i3 “hands-down, the best fit and finish check they’ve ever made on a vehicle.”

This was due to the adjustable snap fittings inside the door, allowing for adjustment of the outer panel on the Y axis.

The downside of the doors were the amount of components and inserts, Ellis said; it seemed like something that was fine for a low-volume vehicle but wouldn’t fly in a mass-produced one.

Finally, the battery, which attaches to a large rectangle made by the borders of the frame was “probably one of the best I’ve seen,” Ellis said, with its eight self-contained, 12-cell modules that can easily be independently removed and replaced instead of tossing the whole battery.

Of course, there are two more familiar alternatives to carbon fiber that are both rapidly advancing and better understood than carbon-fiber: steel and aluminum. That was the argument raised at Megatrends.

Macher said he thought carbon fiber use in the manner of the i3 could be just a “gimmick” unless the cost dropped. BMW built the car “primarily to learn,” he said. (Here’s his presentation.)

“Less expensive carbon fiber is going to be a challenge,” Macher said. In some cases, he said, it was $30 a pound — “truly unacceptable.”

Macher said one option would be to do carbon fiber “inners” with aluminum or steel “outers” or vice versa. Those would still be handled in the remove-and-replace manner of the i3 carbon fiber, he said.

Nevertheless, carbon fiber use in vehicles in general would grow from 3,700 tons industrywide to 10,800 tons by 2030, he projected.

Ducker Worldwide project director Abey Abraham presented 2011 data from Ducker and the Oak Ridge National Laboratory that found that compared to mild steel, carbon fiber cost $6.50 per pound of weight saved. Advanced high-strength steel cost $0.50, aluminum was $2 and magnesium was $2.50, according to that data. (See his presentation here.)

He too predicted there wouldn’t be a “surge” in carbon fiber use, though the next five to ten years would see more of it.

Asked if carbon fiber wasn’t realistic given the cost to eliminate a pound of weight, Munro said doing a straight material-to-material cost was the wrong question.

Carbon fiber is “stiff as a brick” and gives a “perfect build every time,” he said, versus aluminum or steel’s springback and other vehicle production hassles. (Though despite carbon fiber’s impressive hardness, the webinar also indicated it required delicate handling during the production process to avoid breaking, which was a hurdle.)

Also, the total cost needs to be considered — particularly as the body construction dictates every other part of the vehicle, he said. Automakers should ask: “What did I just avoid?”

Finally, according to the webinar, BMWs new plant for carbon fiber production cost only a third of what a traditional body-in-white facility would cost.

Infosys advanced engineering group head Ravi Kumar was, like Munro, more optimistic about carbon fiber’s future in automotive, even if it wasn’t cost-effective “at present.” (See his presentation here.)

He noted that the cost would likely decline from future advances in materials (technology does have a tendency to get cheaper and scale, as financial commentator Andy Kessler often observes), and it would also decrease at higher production volumes.

Featured image: Two executives with Munro and Associates, whose company disassembled a BMW i3 RX down to the ball bearings (and is regularly contracted to do these teardowns for the industry), were blown away by the car’s engineering and implications, presenting their findings in a webinar Wednesday. A screenshot is shown here. (Provided by Munro and Associates)