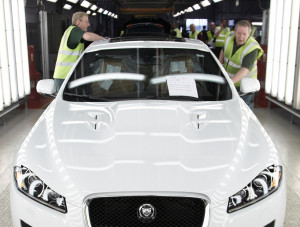 Jaguars and Land Rovers have been made of aluminum before the 2015 Ford F-150 shook up the automotive and collision repair worlds, but the investment in the Castle Bromwich plant still signifies a major automaker vote of confidence in the material as aluminum, higher-strength steel and even magnesium and carbon fiber compete for market share in automotive production.

This reinforces what we gleaned from Automotive Megatrends USA last week: If your collision repair shop is not ready for more advanced steel and aluminum (and even carbon fiber might have a shot at future vehicle bodies), you’re going to have problems. Lightweighting isn’t going away.

Both the U.S. and Europe have aggressive direct or indirect fuel economy standards in the 2020s, with the U.S. requiring fleets to average 54.5 mpg in 2025 and Europe’s curtailing of emissions equating to cars having to reach 57.4 mpg in 2021. Moving from weaker steels to the more advanced materials described above will be a major part of that equation.

“This investment, made here in the heartland of our UK business operations, signals the confidence we have in this region to support the creation, engineering and manufacturing of ultra-low emission, premium British products, today and in the future.”

The massive Castle Bromwich spending supports the 2016 Jaguar XF, shown off Tuesday in what Jaguar said was the world’s longest tightrope automotive act above water. The 2016 Jaguar XF drives 240 meters on two 34 mm wires 18 meters above water in London on Tuesday. (Provided by Jaguar)

And here’s a video from Jaguar:

The facility will get a nearly $475.2 million aluminum body shop “which completes the site’s transformation into a global centre of excellence for lightweight vehicle manufacturing,” according to Jaguar. The automaker touted the shop’s ability to convert mid-production to build any other Jaguar, and noted that companywide it “continues to maximise the opportunities afforded by investment in a modular, scalable aluminium architecture.”

The plant will also get a nearly $23.8 million “blanker line” which converts aluminum coil to sheets that can then be turned into parts and panels using a nearly $74.3 million Aida press line that’s being built now. Another nearly $44.6 million has been used to upgrade the trim and final assembly areas.

Featured image: Jaguar staffers work on the Jaguar XF at the Castle Bromwich  manufacturing facility in this picture provided in 2012. (Provided by Jaguar Land Rover)