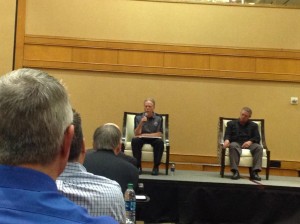 Editor’s Note: This is Part 2 of a series on topics discussed at a lengthy Society of Collision Repair Specialists Repairer Roundtable on Wednesday. Part 3 will discuss future materials changes.

The level of cleanliness required to work on future cars could be a hard adjustment for some collision repairers, and a greater attention to safety is needed now, according to a Repairer Roundtable hosted Wednesday by the Society of Collision Repair Specialists.

But that consideration could become moot when you start mixing and matching steel and aluminum more extensively on a single vehicle.

It will take, Marks said, a “level of hygiene we’re not used to.”

If you touch aluminum and steel, it could lead to corrosion or worse — thermite — and even carbon fiber can corrode aluminum.

“People have to be cleaner,” Gruskos said.

Aluminum dust on its own is combustible, which is why Ford requires a Wet Mix vacuum system to remove it as well as prevent corrosion. You can’t just convert a paint bay to aluminum repair and turn on the fan, Gruskos said.

Marks joked that an air blower can be a “body man’s best friend” to blow dust off of a vehicle, and that definitely shouldn’t be the case. You must use the vaccuum system system to remove metal particles from a vehicle — and a shop should think of any Wet-Mix vacuum like a fish tank and “change the water,” Gruskos said.

Another overlooked safety concern, according to Marks, was the fumes from weld bonding. And as far as fumes go, collision repairers should make sure not only that the vapors are being extracted but enough fresh air is being introduced into a shop.

Marks supported the idea of dedicating an area to mixed-materials vehicles, similar to the aluminum area, though he worried that it would cause collision repairers to relax their guard on hygiene.

“There’s a tremendous lacking in facilities,” Gruskos agreed. He gave the example of Audi, whose body room is “not just a curtain room,” but a curtain room with fireproofing and silver threads woven into the material.

Whatever “glorious room” is installed, Gruskos said, you have to use it, not just make it a storage area. The discussion Wednesday hinted at repairers who buy the tools required to work on aluminum and other lightweight vehicles, but then neglect to use them.

Besides preventing corrosion, 100 percent of the “little black dust” from carbon-fiber repairs must be removed Gruskos said; it’s conductive, and can ruin an engine. Doing a carbon-fiber repair can also create a lot of smoke, which also needs to be dealt with, he said.

Marks, who perhaps put the most emphasis on safety, said it’s a hard topic to sell to a collision repair business — you have to “spoon-feed” it to technicians, he said.

He noted that some collision repairers whose shop reached out to I-CAR had to be reminded of “some very basic things.”

Gruskos gave the example of a technician punching a hole through boron steel with a rivet gun.

“Should the tip break, it’s now a projectile,” he said.

Moderator Aaron Schulenburg, SCRS’ executive director, said that while such examples can seem extreme, there are “very serious consequences” to errors in a shop.

Another safety recommendation: Use a fresh-air hood while welding, Gruskos said. Some OEMs require them, but it should be standard, he said, recommending one by 3M (though he noted it was expensive).

Though responsibility for teaching a staff the right procedures and keeping a safe work environment falls on the business owner, an individual technician’s loss of focus can often be a culprit.

Boylan said that he’s seen people get hit with equipment.

“Usually, it’s their negligence,” he said. He said every time he’d been hurt on the job, it was his own fault.

Marks also noted safety on new tools is overlooked in favor of training on their operation.

And even operational training is a little suspect. Boylan said his school system did him a disservice by passing him with 60-70 percent scores. You don’t want someone who only scored 70 percent working on your car, he said. (It’s like the joke that someone had to be the lowest score in med school.)

“We call that Swiss cheese learning,” he said.