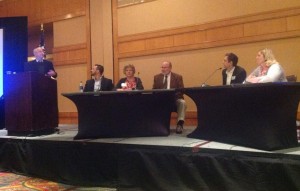 Panelist Clint Rogers, owner of Triangle Collision, confirmed after prodding by SCRS Executive Director Aaron Schulenburg that PartsTrader had paid his airfare to participate in the panel on electronic parts procurement.

“I was personally completely unaware of the PartsTrader influence,” Stabler said. “… I never would have thought that somebody would have done something like that.”

He criticized both PartsTrader for incentivizing a repairer’s appearance and Rogers for accepting the subsidy.

“Both things are interesting to me, and disappointing,” said Stabler, the president of Pride Collision Centers.

Parts and Materials Committee Co-Chairman John Bosin, the organizer of the forum, said he knew Rogers had been suggested by parts committee member Ken Weiss, PartsTrader’s director of business development, but was caught off-guard by the subsidy.

“It was a total surprise to me and to the committee,” said Bosin, I-CAR’s director of OEM segment development. “… I was kind of stunned by it.”

He said he was “surprised and disappointed” in PartsTrader.

Contacted for comment on the controversy, Rogers elaborated on his position in an email Wednesday afternoon:

PartsTrader did point out that it had been asked — as were other parts procurement companies — to recommend a panelist.

PartsTrader business development Vice President Dale Sailer also noted that Rogers was only reimbursed for his travel expenses – not paid on top of that. “That would have been inappropriate,” Sailer wrote.

“Rather, after being requested in writing by the committee chair to secure a panel participant, PartsTrader offered to ‘reimburse’ Mr. Rogers for his expenses in traveling to Atlanta on one week’s notice,” Sailer continued. “In our opinion, this was the appropriate thing to do.  And we certainly did not, nor do we, object to Mr. Rogers stating this.”

Sailer also wrote that that Rogers was giving his own opinion, and Rogers still saw room for PartsTrader to improve.

Rogers’ reimbursement was revealed partly into the discussion, shortly after he said he had adopted PartsTrader “100 percent” at Triangle.

Schulenburg, at one of the audience mics, said repairers were tired of “fielding commercials” and asked Rogers if he had paid the registration fee for CIC.

“Aaron, I think you’re way off base,” Rogers said. He said he was there for PartsTrader, but not in their pocket.

Schulenburg called it disengenous for a panelist to be paid to endorse PartsTrader, and Rogers said he’d taken the day off of work.

“Did PartsTrader pay for you to be in this room?” Schulenburg asked.

Yes, Rogers said: The company had covered his flight.

Panelist Jeanne Silver, co-owner of CARSTAR Mundelein, defended Rogers, saying that he was using a “product that works for him and he likes it.”

Following the “embarrassing” incident, Stabler said CIC would work to bring “greater transparency” to the process during the remaining year and a half of his term.

“Because of this, I have a system to prevent it from happening in the future,” he said. “… I’m sad that it happened, and I’m sure everybody learned from it.”

“It probably has happened in the past,” he said.

Bosin said that he’s had leadership roles with the parts committee for years and been very active in CIC panels, and “it just has never been an issue,” though “I imagine we’ve had some panelists a company may have paid for” in the nearly 30 years he’s gone to CIC.

Potential forum candidates, which are supposed to be vetted by the committee chairman and ultimately sent to the CIC chairman, would be more thoroughly scrutinized, according to Stabler.

“We are going to require some level of assurance that at least whatever potential conflict of interests are exposed,” he said.

The process would look at preventing third-party sponsorships like the PartsTrader example, rather than exclude on the basis of other business connections.

“Every business has relationships with other businesses in the industry,” he said.

To this point, Stabler wouldn’t look to restrict the nomination process even if it also creates the potential for nominators to stack the deck with satisfied customers. Otherwise, how could CIC guarantee speakers with experience on different systems? (You wouldn’t want to inadvertently book all PartsTrader opponents or all “call and fax” users?)

“In all of our discussions, I am supportive of having competing viewpoints represented; I’m OK with that,” Stabler said. “I’m OK with having voices heard.”

Bosin agreed with Stabler that attempting to restrict the nomination process itself wasn’t realistic, and everyone is going to be have a bias about a product they use or are “forced to use.”

However, “I will be doing deeper vetting,” he said, though he said he wouldn’t do so with people he knew well.

“I would not question the integrity of a Jeanne Silver or a Ron Reichen or a Christy Jones,” he said.

Bosin said he knew Rogers was a “strong advocate” for PartsTrader, but he assumed other panelists would have their own preferences and could share those perspectives.

“We did expect various repairers to have a system that they preferred,” he said.

Sailer said that Rogers was expressing his own views despite the airfare.

“It was quite clear that the opinions expressed were (Rogers’) own based upon his experience using the PartsTrader application for over a year,” Sailer said. “While he did clearly identify features he would like to see improved, his overall experience has been positive, so much so that his business voluntarily uses the PartsTrader tool for procuring 100% of their needed collision parts.”

At one point during the discussion, Rogers said one hates being forced to do anything — State Farm mandating the system, in this case — but it was better than “calling and faxing.”

Still, “you have to integrate pieces of the old system into the new system,” he said — making sure the same person is at the other end of a PartsTrader order from a supplier so he or she knows what’s an acceptable part.

Stabler wouldn’t give more details about the new policy, saying it’d be inappropriate to talk to the media before discussing it with his committee chairmen.

But “we are going to take steps,” he assured.

A controversy also existed on the configuration of the panel itself.

UParts CEO Alex Adegan said he was to be on the panel, as were staff from other procurement systems, and at the “last minute” — in Atlanta itself — he learned this was changed. Sources said OPSTRAX, another PartsTrader competitor, was also to have an executive seated there. At least one repairer was also supposed to participate.

But Bosin said those who thought procurers would be directly represented were “misinformed” and forwarded an invitation to a March 24 conference call he said explained the panel would be all repairers.

Regardless of whether it was meant to include parts companies as well as the repairer side, the point of the panel was always efficiencies and inefficiencies in electronic parts procurement.

A CIC agenda advertises the forum as: “A Panel of industry experts take an insightful look into the inefficiencies of the current parts procurement system. There has to be a better way! Don’t miss this one,” it states.

Stabler said he had suggested something similar to the committee, which is ultimately free to make its own decision.

“I wanted to see them explore the electronic parts procurement systems and to identify areas where they are efficient and inefficient from a body shop’s perspective,” Stabler said. “… As an industry, we need to be looking at ways to reduce waste.”

Bosin agreed this was the intention.

“We didn’t want commercials,” he said.  “… We would probably get commercials from the floor because it’s open-mic.”

He also said it was difficult to find repairers because of the PartsTrader “elephant in the room.”

Stabler said committee leaders are free to come up with panelists, though CIC chairmen usually are presented with the final list.

“In this case, it was a surprise the day of,” Stabler said.

Bosin said he hadn’t vetted Rogers before the event, though he indicated he did contact Luehr, who was also less familiar. The rest of the panelists he knew very well.

“The only person that I didn’t know up there was Clint,” Bosin said.

Stabler said he couldn’t “dignify” a question on if Bosin would retain his parts committee position following this CIC controversy, saying it’d be inappropriate to discuss personnel issues with the media. Decisions regarding committee leaders are the purview of the CIC chairman.

But Bosin said he was still a co-chairman — “no one’s asked me to leave it or resign it.” In fact, he was going to lead a discussion at the July Detroit CIC on a parts procurement value-stream map (an intense Six Sigma flowchart for analyzing your business), “taking an unbiased look at the parts procurement process.”