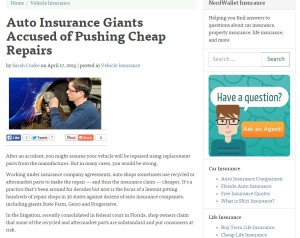 The consumer financial advice and comparison shopping site NerdWallet on Friday published a lengthy feature on collision repairers’ complaints against auto insurers, another piece of coverage which brings the controversy to a larger audience.

Like the “Anderson Cooper 360” piece, it focuses primarily on insurers’ reliance on recycled or aftermarket parts instead of OEM components and allegations that they steered customers to certain shops.

It kicks off by highlighting the fine print some policyholders might not even know exists: “After an accident, you might assume your vehicle will be repaired using replacement parts from the manufacturer. But in many cases, you would be wrong.”

“Is there a time for used parts? Yes, there is, especially if a consumer wants to save some money on an out-of-pocket repair,” Indiana Auto Body Association Executive Director Tony Passwater told NerdWallet. “But that’s not what’s happening. It’s being dictated each and every time by the insurer that ‘You must use this, or this is all we’ll pay.’”

The website also for balance offered insurers’ arguments that they would financially lose by encouraging poor repairs and are trying to save customers premium money.

“I don’t know why an insurer would want to put an unsafe car back on the road,” Insurance Information Institute media relations Vice President Michael Barry told NerdWallet. “They’re still insuring the car and any passengers they have.”

As for steering, NerdWallet gives the example from A&E Body Shop et al v. 21st Century Centennial et al of Express Paint and Body, which left Geico’s direct repair program and and allegedly “immediately” was disparaged by Geico. Geico-related revenue dropped from more than $205,000 to less than $30,000 in a month, NerdWallet reported; the next year, Express only made $85,000.

It concludes that such cases have gone to the legal system before, with both sides posting wins and losses, and also points out that similar allegations by auto shops led to the 1963 Consent Decree involving insurers.

Featured image: The consumer financial advice and comparison shopping site NerdWallet on Friday published a lengthy feature on collision repairers’ complaints against auto insurers, another piece of coverage which brings the related issues to a larger audience. (Screenshot from www.nerdwallet.com)