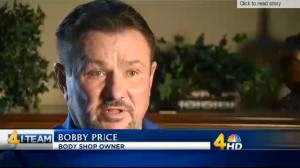 A Nashville television station has highlighted a Tennessee collision repairer’s lawsuits against GEICO and Progressive — as well as brought up former insurance estimator’s 2014 insider revelations of steering by Progressive.

In a similar fashion as other coverage of shops’ disputes with insurers, the WSMV report posted online Thursday focuses on insurers requiring aftermarket/used parts and “steering” to particular shops.

Potts says in the broadcast that Progressive’s preferred auto body shop quoted him a $792.98 estimate to fix car damage, something that was laughed at by another shop owner and contradicted by a third’s more than $2,836.87 estimate.

“There’s no question that they steered me to their appraiser, and he just so happened to be in a preferred body shop,” he told the station.

He attributed the difference to aftermarket parts allowed under his policy.

“They’re going to try to save as much money as they can,” he told WSMV. “If it’s to use aftermarket parts or give you a low initial estimate, that’s what they’re probably going to do.”

We couldn’t obtain Price’s lawsuit against GEICO, but his lawsuit against Progressive (actually two cases being handled together), Price’s Collision Center v. Progressive, was available. It recently was allowed to remain in Tennessee, as Price had wanted, instead of being consolidated with other states’ cases in Florida.

It alleges that Progressive breached contracts by failing to pay for the necessary repairs on two customers’ vehicles and improperly meddled by steering.

“It had become glaringly clear to me that this problem (steering) was getting worse,” Price told WSMV.

WSMV said GEICO hadn’t responded in court or to a request for comment, but Progressive denied the claims in court and sent the station a comment that “We don’t comment on pending litigation … It is our practice to offer customers the choice of where they wish to have their car repaired following an accident and to work with the shops of their choice to exceed their expectations.”

Unlike other items filed in Price’s case against Progressive, former Progressive manage repair representative David Edwards’s September 2014 affidavit wasn’t sealed, and the station described it in the broadcast posted Thursday. We obtained a copy as well.

In the document, Edwards said he had worked as an estimator, expert process property damage specialist, network manager and supervisor at Progressive  for more than 17 years until Aug. 12, 2014. In April 2014, he was assigned specifically to Price’s customers.

“In my experience, it was unusual for an MRR like myself to be assigned to one series of shops, especially given how far away Price’s shops were from one another,” Edwards states.

But while “I never had any more issues with Price’s Collision Centers or its work than I did with any other body shop,” Progressive had been making “derogatory comments” about Price’s since 2004, according to Edwards, and “I was specifically prohibited from placing Price’s in the network.”

Edwards said “management told its Progressive employees that it did not want vehicles repaired at Price’s Collision Centers,” and this was “well-known” at the Nashville office.

Meanwhile, Progressive was evaluating adjusters on how many claims were handled at network shops, he said in the affidavit.

“In those instances where a Progressive insured or claimant would bring his or her car to Price’s despite the steering, Progressive routinely denied payment on supplements,” Edwards says in the document. “Despite these supplements being for required repairs, Progressive regularly refused to pay for supplemental repairs requested by Price’s and did so both to save money and to also discourage insureds and claimants from ever returning to Price’s. For instance, Progressive employees would tell its insureds and claimants that a network shop would not be demanding these supplemental expenses, and that, as a result, the insured or claimant may bear responsibility for paying these expenses out of pocket.”

Edwards said he’d personally heard managers disparage Price and his shops, including one saying “I hate these motherf–s” as the supervisor and Edwards pulled into a Price’s Collision.

Featured image: A WSMV segment spotlights Price’s Collision Center owner Bobby Price, who has sued GEICO and Progressive claiming breach of contract and tortious interference and who is seen in this screenshot from WSMV video online. (Screenshot from www.WSMV.com)