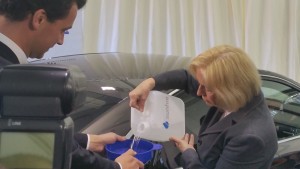 Like the MINI augmented reality glasses, this one just falls into the category of “cool car stuff” rather than technology with a major direct collision repair impact:

“This synthetic diesel, made using CO2, is a huge success for our sustainability research,” Wanka said in a statement. “If we can make widespread use of CO2 as a raw material, we will make a crucial contribution to climate protection and the efficient use of resources, and put the fundamentals of the ‘green economy’ in place.”

Sunfire uses something called the power-to-liquid principle to make the “e-diesel.” (You’re replacing your fuel with a digital version?) According to sunfire and Audi, that process involves really hot electrolysis transforming the CO2 and H2O into a gas which can be converted to a hydrocarbon known as blue crude. That substance becomes diesel through the usual refinery process.

Right now, a biogas company provides most of the CO2, according to Audi, but part of it does come from the air itself courtesy of partner Climeworks.

The entire process is about 70 percent efficient, Audi says. It also points out that the electrolytic heat — requiring temperatures of more than 1,472 F — can be recovered, and that part of the process can help stabilize the electric grid.

The end product doesn’t seem 100 percent “green,” and neither is “clean diesel.” You’re still creating a hydrocarbon to be refined into a diesel fuel that, as this CarsDirect analysis points out, produces emissions when you drive to the mall. But this fuel would seem to cut the need to drill for petroleum, which would be a big environmental plus and contribute to energy sustainability. It also would let you recycle some of the carbon dioxide you released in the atmosphere.

Better still, the e-diesel doesn’t have any aromatic hydrocarbons — which means it doesn’t have benzene or the accompanying odor — or sulfur.

It can be mixed with diesel, similar to ethanol being added gasoline, or “prospectively” used on its own, according to Audi, which says the ultimate goal is to be CO2-neutral.

“In developing Audi e-diesel we are promoting another fuel based on CO2 that will allow long-distance mobility with virtually no impact on the climate,” Audi sustainable product development leader Reiner Mangold said in a statement. “Using CO2 as a raw material represents an opportunity not just for the automotive industry in Germany, but also to transfer the principle to other sectors and countries.”

Audi’s going to produce 792.5 gallons in coming months. Gizmag said it’d sell for somewhere between $4.12 to $6.18 a gallon, similar to what diesel costs in Europe now.

Techically, we suppose there is a collision repair angle for European body shops. Europe actually looks at emissions rather than miles per gallon. So if this stuff ends up net producing less carbon dioxide than other diesel, it could perhaps slow whatever the EU requires

That could buy you a little breathing room by delaying whatever materials breakthrough (Magnesium? Carbon fiber?) will be coming to cars then.