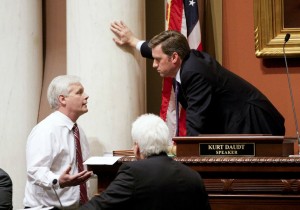 Proposals to close a “steering” loophole and bar insurers from mandating parts and estimating services appeared to have a shot at passage in Minnesota after being included in a budget measure.

Then the legislative scramble happened.

A last-minute breakdown in budget negotiations caused lawmakers to “hastily assemble a skeleton, ‘lights-on’ bill” for passage before the 2015 session, according to an Alliance of Automotive Service Providers of Minnesota news release this week.

To ensure passage before the Legislature ran out of time to approve any spending at all — think federal “government shutdown” — officials stripped out any policy riders that might be controversial, including AASP-MN’s.

“We came so close,” AASP-MN Executive Director Judell Anderson said in a statement. “If we had been given an opportunity for a fair hearing to make our case, I’m confident the votes were with us. As it is, it doesn’t really feel like we got outplayed or beat by our opponent, but rather were the victim of a bad call by the referee,” she added.

The session truly ran down to the wire, according to Forum News Service coverage: “Senators passed the measure at two minutes before midnight, and a Senate worker ran it to the House.”

Besides the Legislative shot clock, the House was also facing the wrecking ball, according to Forum.

“Right after the Legislature adjourned, workers began tearing up the House chamber as part of a three-year Capitol renovation project, making holding a special session difficult,” the wire service reported. “(Democratic Gov. Mark) Dayton suggested a session be held in a tent on the Capitol front lawn, an idea most lawmakers rejected.”

Despite the prospect of a special session, Anderson and the organization indicated that the association would try the bill again for the 2016 session.

“In the meantime, AASP-MN plans to regroup, reassess and recharge to fight yet another day for its members and the entire collision repair industry,” the organization said in a news release.

The proposals had faced setbacks throughout the session. Initially, AASP-MN had tried to pass them as part of piece of distinct legislation through Senate File 135 and House File 458, but the Senate Commerce Committee didn’t make a recommendation on it, and the House Commerce and Regulatory Reform Committee took no action.

“We got no cooperation” from the House, Anderson said in an interview Thursday, and the Senate only “at best” provided “reluctant cooperation.”

AASP-MN also described “orchestrated attempts by Senate Commerce Committee members to send the bill off ‘to die’; and a radio campaign by the insurance industry characterizing the bill as anti-consumer and anti-choice.”

The bill actually seems to give consumers more choice. It would have barred an insurer from requiring a consumer have a vehicle claim estimated or inspected at any particular repair shop. Right now, it’s only illegal to demand those procedures at a “facility solely under the control of the insurer”

It also gives repairers greater choice, even if it does strip some insurer rights. In the original bills’ language, auto body shops couldn’t be forced to use any particular product or vendor. The final proposal included in the omnibus spending bill would have only blocked insurers from requiring a particular estimating system or vendor/program for obtaining parts.

Anderson said her association had tried a version of the bill in 2014 but couldn’t get traction in the short session. They refined it “wordwise” to eliminate “what was giving the insurance companies the most heartburn” and possibly give the bill a better shot.

However, AASP-MN also noted the appearance of the “usual army of insurance industry lobbyists, including additional contract lobbyists” to oppose their bill.

“Legislators were inundated,” Anderson said. She said “every office we walked into” described 10 other prior lobbyists in to discuss the bill.

“It was not 10 repairers, it was 10 insurance companies,” she said.

The Insurance Federation of Minnesota pointed out that customers are happier with direct repair programs, citing a J.D. Power & Associates study and cited another GS Strategy Group survey finding that customers liked getting recommendations from insurers. We couldn’t find the J.D. Power study online (though we found references to one saying the opposite), unless the insurers are referring to the finding that DRP shops tend to repair vehicles faster.

Regardless, customers liking DRP shops doesn’t have anything to do with mandating those DRP shops to use a certain estimating or parts procurement service. If anything, they should be happy their DRP shops have more options.

“Some politicians at the state legislature are pushing a new proposal that could harm your ability to choose quick, cost-effective, high-quality auto body repairs by prohibiting insurance companies and body shops from utilizing cost-saving measures, such as using modern methods to obtain parts and calculate repair estimates,” the association argues.

But the bill didn’t actually prohibit either party from doing any of those things. It would have merely prohibited an insurer from imposing a particular method on a shop. So while, as in our example above, State Farm couldn’t force a shop to use PartsTrader and Allstate couldn’t mandate CCC, there was nothing that blocked a repairer who liked either service to use it. And conversely, if a shop chose to buy a part off of PartsTrader or run an estimate on CCC, nothing blocked State Farm or Allstate from haggling over the decision based on their findings from OPSTRAX or Mitchell.

After the failure to gain traction in the House and Senate on their own, the proposals were rolled into the finance bill, which Anderson said had been AASP-MN’s backup plan: “We need to find a vehicle to attach it to to keep it alive.”

That “Plan B” initially almost didn’t happen. AASP-MN spotlighted two senators who helped keep the ideas alive during Senate Floor debate following amendments there to eliminate or neutralize the repairer-friendly language. The association said Democratic Sen. Ron Latz and Republican Sen. John Pederson “spoke very eloquently in defense of small businesses in general and collision repair shops in particular” and saved the proposals at the time.

Minnesota bills from the first year of the two-part sessions will carry over for consideration in 2016, saving collision repairers some trouble.

“We don’t have to have a new bill introduced or anything,” Anderson said. Plus, legislators certainly were very familiar with the issue after the heavy lobbying on both sides, and AASP-MN would keep explaining their position.

“We will certainly be talking to those legislators who both helped us and who hindered us,” she said.

Despite the letdown, Anderson pointed out that getting anything passed was “not an easy process” and always carried “big risk and big reward.”

“We have had success here in Minnesota,” she said. “… It doesn’t happen overnight”

Alliance of Automotive Service Providers of Minnesota, May 2015