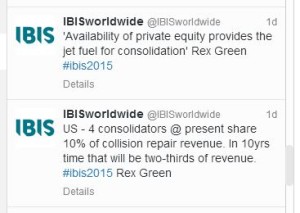 We couldn’t go to Greece for the International Bodyshop Industry Symposium hosted by bodyshop magazine, but at least we were able to live vicariously through IBIS Worldwide’s excellent live Twitter feed of the event ending Friday.

That coverage revealed the IBIS Summit to have hosted some bold proclamations related to the collision repair industry in the U.S. and abroad.

“Collision couldn’t be a hotter investment right now in the U.S.,” Green said, predicting that the “very exciting time in collision” for America would spread to other countries, IBIS tweeted.

Green said that right now, ABRA, Gerber, Service King and Caliber have 10 percent of the industry’s revenue but would do two-thirds of all collision repair business by 2025, the conference reported.

“In the next 5-10 years ‘stubborn holdouts’ (non-affiliated) bodyshops will be doing something else with their business,” he said, according to IBIS.

‘Can you hear the footsteps of the seamless claims process which just happens’ Sean Carey #ibis2015 — IBISworldwide (@IBISworldwide) May 28, 2015

“OEMs will be in the driving seat,” he said.

A glimmer of this concept can be seen with GM’s plan to offer more diagnostics through OnStar to certain 2016 Corvettes, Equinoxes, Silverados, Suburbans, and Tahoes, with more vehicles to come. More frequent reports on other items like tire pressure — which are already available monthly to OnStar subscribers — will be rolled out in 2016.

Eighty percent of auto body technicians who train with Tesla wouldn’t pass the OEM’s aluminum welding class on the first day, MacDonald said, according to IBIS.

Ouch. Unfortunately, similar points were made at the April Collision Industry Conference.

Chess noted that one shop failed so badly the entire estimating staff was sent to training.

MacDonald also described how the company micromanages repairs, which does raise the question of how Tesla plans to keep up with that level of quality control if Teslas go as mainstream as they hope.

Featured image: Tweets from IBIS Worldwide feature quotes from Rex Green of BB&T on consolidation. (Screenshot of feed from www.twitter.com/ibisworldwide on Tweetdeck)