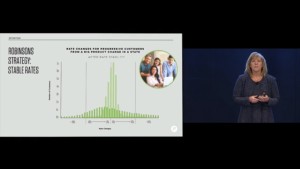 We already covered the big lesson from Progressive’s May investor webcast: The insurer’s own data set has so far proven that safety technology cuts crash volume, which will be bad news for the collision repairs of the future. But there are a few other messages collision repairers should note as well.

Progressive likes what it’s doing with claims — and service centers

“Claims is actually in very good shape,” Progressive CEO Glenn Renwick said, though he didn’t elaborate further except to indicate some minor tinkering would still continue.

He said that the insurer was happy with its performance on claims quality, cost, customer satisfaction and work environment.

“We are really very solid on all of those fronts,” he said.

So don’t look for big changes in how Progressive does business with shops. On the other hand, perhaps there’s some comfort in that Progressive doesn’t see claims as something deserving a cost-cutting crackdown.

In terms of all Progressive auto expenses, personal lines Chief Operating Officer Tricia Griffith said “we continue to be very pleased with our progress on cost structure.”

She pointed out that expenses as part of the loss ratio had fallen 1.7 points in the past five years despite all that advertising the company had pumped into the marketplace.

In terms of adjustment expenses for auto losses, Griffith said the company has shaved off two points from its ratio in the past decade. That might have extended beyond cracking down on fraudulent policyholders and bill-padding repairers to affect honest customers and body shops. 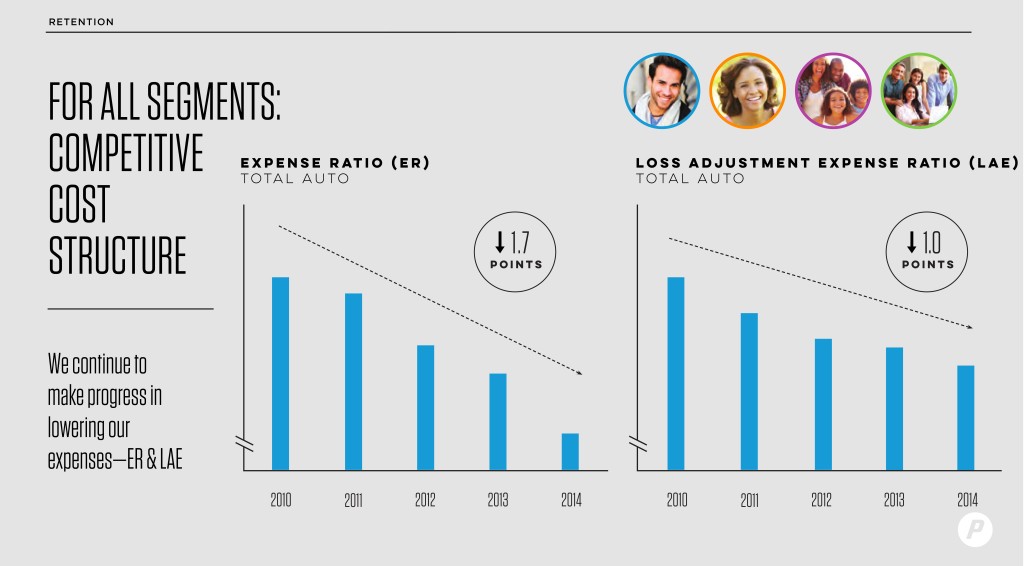 Progressive expense and auto loss expenses are shown in this graph. (Provided by Progressive)

Also on the claims subject, collision repairers who’ve alleged “steering” or have other concerns about direct repair program auto body shops should take note of the fact that Progressive really likes its claims-handling service centers.

How to raise rates

GEICO and Allstate received attention recently for planning to raise rates because of increased expenses, which we snarkily pointed out was a perfect argument to throw back at an insurer balking at higher aluminum labor rates to recoup equipment costs.

Progressive’s rate strategy seems to be more gradual, using the “pull the bandage off slowly” approach over the “tear it off” method to keep customers from leaving from the pain.

“Three 1 percent changes are better than one 3 percent change,” Renwick described his philosophy, following the observation that in the past he’s had to give the “awkward” Progressive “took a half a step back on retention” because of rate changes.

Griffith later elaborated on that with regards to retaining a hypothetical “Robinson” family. Focus groups had shown minor rate adjustments to be acceptable.

“They want stable rates,” she said. “It doesn’t mean you can’t tweak them a little bit. They get that. But they don’t want to have that rate shock.”

That could be a more palatable way to charge higher rates for insurers or the public in general — or just something to keep an eye out for from your suppliers and other vendors.

Renwick also mentioned the idea of Progressive changing rates frequently to adjust to trends the insurer had seen, an interesting concept that makes sense when you consider that goods change price frequently — so why not more services?

“I couldn’t be happier with that,” Renwick said of the driving monitoring device. “… It’s even more powerful as a rating variable than we originally thought.”

CFO John Sauerland also seemed positively giddy about what Progressive can do with its driver data. We wouldn’t be surprised if Progressive is the first to make telematics mandatory for all insured whose vehicles can accept such gadgets.

Customers seem to like it as well, according to Renwick, who called it “clearly, something that is starting to gain serious traction in the market.”

What increasing Snapshot usage (whether mandatory or by consumer demand) will end up meaning for repairers is unclear.

Likely some kind of rate shakeup will happen as “good” and “bad” drivers are better distinguished. That could involve the former obtaining lower rates that prompt them to consider optional collision and comprehensive insurance or the latter receiving higher rates, prompting them to shed anything but mandated liability.

The next step of Snapshot could involve obtaining greater diagnostic data, which could cause headaches for repairers if the situation shown by Progressive’s “black box” to a remote adjuster doesn’t match the damage a repairer can physically see on the vehicle.

Quite frankly, we’re not entirely sure what insurance telematics will mean for repairers in the future. But it bears watching.