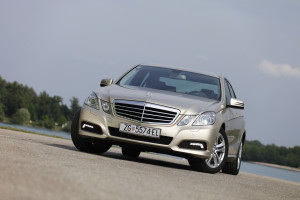 The next-generation Mercedes E Class on sale in March 2016 will have the ability to self-drive on highways and country roads, Bloomberg reported Tuesday — but you’ll have to keep your hands on the wheel.

Bloomberg reported that the technology in the new sedan worked up to 80 mph — and even read speed limit signs to adjust its velocity. However, it can’t do sharp turns yet (though in theory it could), and it had a few issues.

“While tree shadows and temporary signs at big construction sites sometimes confused the system, it managed dark tunnels and operated to a top speed of 130 kilometers (80 miles) per hour,” the news serviced reported. “Though nerve-racking at first, the effect was eventually relaxing and comforting.”

Drivers still have to keep their hands on the wheel or be beeped at by the car, and if the “Look Ma, no hands” act continues, the car stops driving itself and you’ve got no choice but to quit slacking and drive, according to Bloomberg.

That seems to solve the liability question, but unfortunately you still won’t get the true self-driving experience that would let you sleep or just read a book while the car chauffeurs you. (Of course, some Mercedes owners already have a chauffeur too.)

A less advanced S Class system already in existance can handle stop-and-go driving up to 37 mph and does allow you to have your hands off the wheel if the car is going less than 6 mph, according to Bloomberg’s Tuesday report and in 2013. The S Class option costs a little more than $2,500, Bloomberg reported Tuesday.

As for self-braking an E Class can stop suddenly in time to avoid a crash at speeds of either 40 or 55 mph, the news service reported. (Bloomberg gave different values at different points in the article.) It also can help a driver which has swerved to avoid something steer around the object.

Mercedes’ autonomy-meets-cruise control move incorporating the car’s steering wheel seem to make the technology palatable in terms of liability — there’s no messy “Who gets sued?” question; it stays the human driver’s fault. That should allow the technology to clear regulators and hit the roads to start eroding collision repair business.

The stop-and-go traffic and automatic braking systems are probably still the nearer-term collision repair business threats. As to the latter, Progressive has already seen a reduced loss ratio from the broader category of collision detection technology, which includes both cars that tell you when you’re about to hit something and cars which stop themselves.