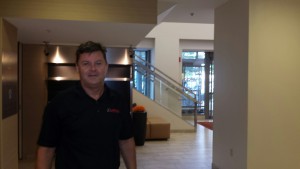 Byers discussed CARSTAR versus the Big 4 MSOs — both on a macro level and for a shop owner considering their options; insurer-repairer disputes; and CARSTAR’s approach to differentiating shops based on repair severity and auto body materials in an interview with Repairer Driven News ahead of the Grand Rapids Collision Industry Night event.

At this point in the industry, Byers said, a shop has three options. Stay independent and pay for the resources you need yourself (“Good luck,” he said.), sell out to one of the consolidators, or become a franchisee.

“Now’s a great time to sell,” he agreed, but for owners who didn’t want to lose their business, joining CARSTAR made sense because of the leverage its brand and scale could provide in terms of insurance, resources, education, discounts and rebates.

Last year, CARSTAR’s same-store sales grew 12.5 percent, which even if skewed by CARSTAR newcomers booming in their first year tapping into the franchisor’s DRPs is still impressive. The company has 430 franchises in Canada and the U.S., which CARSTAR said made it the largest MSO in North America under Roman Group calculations.

“Our model is thriving,” he said.

With lots of publicly-traded and private equity money roaring into its four national competitors, Byers said CARSTAR shops can compete both because the owner retains his or her business — it’s their baby versus their obligation.

CARSTAR also has a far longer transition period for a smaller number of new shops at a time. When Gerber/Boyd, Caliber, Service King or ABRA buy multiple shops at once, they’ve got to convert them to a new corporate culture as fast as possible, according to Byers. With CARSTAR, the new owner has time to adjust and get up to speed through training programs like the proprietary EDGE.

“Ours is much more spread out,” he said.

“We are an insurance-friendly network,” Byers said.

But unlike the other Big 4, CARSTAR franchisees’ independence seems more likely to conflict with an insurance-friendly corporate model. Asked about conflicts between CARSTAR franchisees and insurers over what was necessary in a repair, Byers said it’d be handled the same way as a traditional independent shop — management-level repairers and insurers hash it out. He also noted that CARSTAR gives input to insurers through means like advisory councils, and such input led to early testing of PartsTrader.

There’s also the potential for the local franchise’s bottom line — and CARSTAR Corporate’s too — to be hurt by agreeing to the lower costs insurers’ want. Using an insurer’s preference of aftermarket, recycled or Opt-OE parts over new OEM parts, for example, means markup revenue decreases. Asked about this, Byers seemed to indicate the DRP’s lucrative volume compensated for such losses.

Franchisees uncomfortable with those rules have the option to refuse to participate in certain CARSTAR DRPs, though Byers said he wasn’t sure why anyone would join with CARSTAR only to do so.

“It is certainly up to them,” he said. Franchisees also might opt against a particular DRP on logistics grounds, he said, such as if the carrier uses CCC and a repairer using Mitchell doesn’t want to pay for another information provider.

As for the interesting rise in certified networks — OEM DRPs of sorts — by mainstream as well as luxury automakers, Byers said the decision to be certified as an official Ford or Honda repairer, for example, could also be up to the individual CARSTAR shop.

As for Ford certification on the aluminum F-150, CARSTAR and its franchisees have opted for an interesting approach which could expand to other repair niches.

Byers touted CARSTAR’s assistance in getting franchisees aluminum certification — which he estimated could cost $150,000 — but he noted the company was doing so with a hub-spoke format. A few shops in a particular market get certified and do all the major aluminum repairs. The rest of the shops receive a finder’s fee of sorts for the referral and presumably take some steel vehicles from the aluminum shop if the latter is booked up with F-150s or other vehicles lightweighted with the element.

So far, according to Byers, there hasn’t been any disputes over who gets to be the aluminum shops in a market, and that decision has been made by the CARSTAR repairers themselves during one of the regular area meetings.

In this vein, Byers has discussed the idea of separating shops in further in terms of general repair severity, and he gave a few more details Wednesday. The concept has been tested in some markets with shops divided into light, medium and heavy damage, according to Byers, who said he couldn’t elaborate further since he didn’t have the plan on hand. (Becoming the “light shop” might seem counterproductive, but it gives the opportunity for not only referral fees but a high-volume of easy work requiring cheaper technicians.)

In any case, it was still a work in progress, according to Byers, who said CARSTAR hadn’t quite determined the best approach for further segmentation.