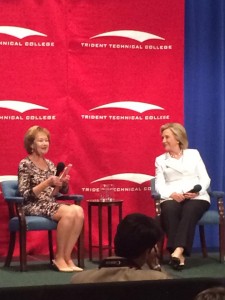 As the collision repair industry faces a shortage of qualified technicians, Democratic presidential candidate Hillary Clinton has proposed a $1,500 tax break for every apprentice trained by a business.

Regardless of one’s feelings on the candidate, the proposal is worth noting for attempting to fill a need that CARSTAR CEO David Byers called likely “the single biggest issue facing the industry today” during an interview last week.

“This is about building our economy from the bottom up,” said Clinton, who discussed the program at a campaign stop June 17 at Trident Technical College in North Charleston, S.C. She said she was “so excited” about the apprenticeship concept, which had a “long history” in America.

“If you do your part, then you ought to be able to get ahead,” Clinton said.

Clinton’s campaign promise, which has been analyzed as targeting millennials and/or a primary state, would give a company a $1,500 tax credit for every apprentice — more if they’re younger. Her main primary opponent is U.S. Sen. Bernie Sanders, I-Vt., whom CNN called “an outspoken proponent of debt-free college.”

“It became quickly obvious to me that we had to give our young people and, frankly not-so-young people, the skills and training and education they need either to get off to a good start … or to be able to change jobs and better themselves over the years,” Clinton said.

Her plan “would insist on accountability for employment and earnings outcomes,” according to her website, which probably means a company couldn’t just take the tax break and not give the kid a job, nor could a minimum-wage employer take the money and call its summer fast food jobs “apprenticeships.”

“In order to be eligible for the credit, apprentices would need to be registered, and qualifying apprenticeship programs would have to meet rigorous federal and/or state standards and outcome measures,” the Clinton campaign websites states.

The government’s $1,500 in unclaimed taxes would buy an average $6,595 increase in the apprentice’s annual future income, according to Clinton, citing a 2012 Mathematica Policy Research study used by the Department of Labor.

“The No. 1 fight that I want to wage and win is making the economy work for everyday Americans, not just those at the top,” Clinton said.

“What Hillary Clinton is proposing to invest in our workforce is right on track. Changing our workforce policies in ways that encourage employers to put real ‘skin in the game’ by investing in apprenticeships, on-the-job training, and partnerships with community colleges can make a big difference,” Byron Auguste, managing director of Opportunity@Work, said in a statement. “Employers spend 20 times as much on training as the federal government does, so smart policies to give them incentives to train people on the retail floor, call center, and factory warehouses to move into better paying jobs make tax dollars spent on training go much further. We need to give more working Americans clear paths into better-paying, skilled middle class jobs that our businesses need to compete and expand.”

“When employers invest in on the job training, workers are more productive, and businesses are more profitable,” Clinton said.

Clinton’s website links the new proposal to her earlier work, including starting Job One at the Clinton Foundation last year. The program targets young people affected by the recession and economic aftermath.

She also took a shot on the site at Republican budget bills which “put education and job training programs at risk by imposing deep spending cuts that could threaten occupational training and adult education programs.”

“Hillary Clinton’s economic proposals have been light on details and heavy on hypocrisy — another example of why voters overwhelmingly believe she is not honest and trustworthy,” Republican National Committee spokesman Michael Short told CNN.