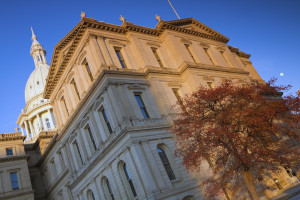 The Michigan Senate Insurance chairman on Wednesday introduced a bill to strip insurers of the power to mandate certain vendors or systems — like the controversial PartsTrader — for buying parts and materials.

Republican state Sen. Joe Hune’s Senate Bill 430 is similar to a 2014 effort in Maryland, budget amendments that nearly passed in Minnesota this session but were stripped out in last-minute Legislative chaos, and a New York bill which cleared committees but failed to clear the Legislature before the session ended in late June.

The bill is short, reminiscent of the New York Assembly Bill 6684, which sat unconsidered in the Senate Insurance Committee but had been scheduled for an Assembly floor vote only to have the legislative shot clock run out.

It adds in language to Michigan law that:

“An insurer shall not require, directly or indirectly, through a contract, program, or policy, a person that operates an automobile repair facility to use a specific vendor or process for the procurement of parts or other materials.”

The ban would start only 90 days after passage of the bill.

“When you allow repairers the freedom to choose the best means to efficiently operate and manage their business and the claim, it benefits all the stakeholders (insurer, repairer and the consumer). This bill will allow collision repairers to identify and select the best vendors to purchase and source parts. More importantly, it will foster healthy competition among parts vendors and third party software providers where the best product and service will prevail. A free and open marketplace always results in better product and service.”

The legislation has been sent to the Senate Insurance Committee. There does not appear to be a House bill yet.

Jordan Hendler, executive director of the Washington Metropolitan Auto Body Association, which unsuccessfully lobbied for the Maryland’s Senate Bill 487 and House Bill 574 in 2014, offered some advice to Michigan collision repairers on convincing legislators that the measure was worth a “yea.”

Hendler said that telling stories related to that state’s customers “is very compelling for legislators,” particularly as big national insurers might be unfamiliar with the market and the specific tactics being used on the ground by adjusters. (Check out any of the “local customer unhappy with insurer over collision repair practices” stories around the country this year on the heels of the lawsuits and the “Anderson Cooper 360” report.)

“If you talk about things from the consumer’s perspective … that’s how they can identify with repairs much easier,” Hendler said. It helps too that legislators seemed to grasp that collision repairers are experts in their fields and not comparable to the guy trying to pound your dents out in a parking lot.

“It was clear that the legislators do view us as a professional,” she said.

Another big selling point against mandating vendors involves buying local. When an insurer requires a part from hundreds of miles away versus a local source, that’s less tax revenue and economic benefit to the state or region.

“Legislators are typically drawn to keeping the economy in their economy,” Hendler said.

Michigan ASA President Ray Fisher, whose organization had pushed for the bill, brought up both factors in a statement Wednesday — and possibly took a veiled shot at State Farm for mandating PartsTrader:

“This bill would continue to allow repairers to choose their parts procurement systems and their parts vendors as they currently do with a majority of their customers’ insurance carriers,” he said.  “In turn, this will continue to increase efficiency for the automotive repair process by supporting local parts vendors and ensuring quality parts for consumers.”