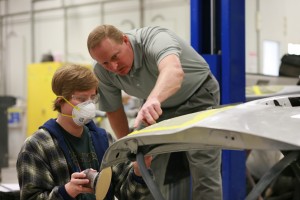 Americans view the education offered at community colleges as nearly on par with four-year schools, Gallup reported June 23, a vote of confidence both for two-year programs and the caliber of the skilled trade workers they produce.

And if we’re lucky, a bit of foreshadowing that professions like collision repair which face labor shortages will see more high schoolers encouraged to attend two-year colleges instead of going to a university.

Seventy percent of Americans polled June 2-7 saw four-year schools as offering an “excellent” or “good” education, and 66 percent felt that way about community college. A similar four-point spread existed during a poll in October 2013, though the split then was 68 percent/64 percent. The poll had a 3-percentage-point margin of error.

Web-based college programs — not so much. Only 36 percent in June thought they were “excellent” or “good,” up from 34 percent in 2013 but a tough break for digital courses. (We wonder what they thought about YouTube instructional videos.)

Also intriguing was how attitudes changed with age and education level when Gallup came calling.

Three-fourths of Americans with grad-student-level education gave positive reviews to four-year schools, compared to only two-thirds who felt that way about community college.

But that spread fell from 9 points to 6 for college graduates and 2 points for high schoolers or younger — and Americans with “some college” actually rated community colleges higher, 74 percent calling it “good” or “excellent” compared to 71 percent who said that about four-year schools, according to Gallup.

However, when you ignore education level and look purely at age, Americans younger than 30 were much more likely to see four-year schools as better. Seventy percent of those 18-29 called colleges/universities “excellent” or “good,” but only 52 percent felt that way about two-year schools. Respondents older than 50 were more favorable to community colleges than four-year schools, particularly Americans age 65 and older.