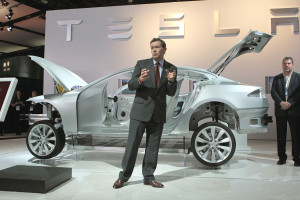 Solera announced Monday that Tesla would use the AudaExplore and AutoWatch estimating and customer service programs in its certified collision repair centers.

The Tesla integration would be available in the next few weeks for North America, Europe and China users, according to Solera. The information provider parent company also said that AudaExplore/Audatex and AutoWatch were Tesla’s “sole choice.”

“We have worked closely with Tesla over the past several months to develop highly accurate and data-driven integrated solutions for Tesla’s collision repair network,” Solera CEO Tony Aquila said in a statement. “Our goal is to fully leverage Solera’s technology platforms to digitally transform the vehicle repair experience for all stakeholders.”

In June, Mitchell announced that it had integrated Toyota’s Recommended Repair Procedures within Mitchell Estimating, allowing users of the desktop service to obtain a list of Toyota and Scion recommended parts and labor for a particular repair. It’s unclear how similar the Tesla-Solera agreement would be to the Toyota-Mitchell one.