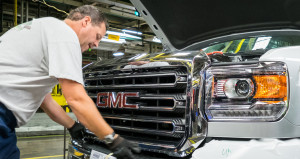 CLARIFICATION: The MyPriceLink program gives GM the capability to change OEM list prices quickly in the estimating systems. An earlier version of this article was confusing on this point and has been changed accordingly.

General Motors has begun testing fluctuating prices in its MyPriceLink pilot, and the company remains on track for a full launch of the OEM parts program this year, an executive said Thursday.

“I’m happy to report that everything seems to be working OK” said Mayer, who oversees GM’s dealer wholesale channel for customer care and aftersales.

No formal date has been officially announced for MyPriceLink’s grand opening, but Mayer reiterated the company’s July 24 NACE prediction that MyPriceLink would be ready possibly as early as October, and likely no later than Dec. 31. GM hopes to have it done before the winter starts flooding body shops with crash business.

“We’ll make sure that we’re comfortable (before launching),” Mayer said.

Mayer on Thursday also addressed some concerns and postulated a few features the program — which by all accounts seems to be seamlessly integrated into the three estimating services — could offer in the future.

To a collision repairer, MyPriceLink should feel like business as usual. (Dealers will have a little more work under the new system.)

“We can be much more nimble in our pricing strategy going forward,” Mayer said.

A repairer prepares an estimate in Mitchell, CCC, or AudaExplore, and the OEM list price populates with whatever new cost GM has set. That’s it, according to representatives from the estimating services.

“It’s really not much of a process change from a shop level,” said Mayer. At most, there’s a half-second or second pause while the system looks up the GM price bid, he said.

The goal is obviously to sell parts, but also to make sure GM customers have better odds of a vehicle returned to “pre-crash condition” via “parts that we validated and feel are safe for the vehicle.”

“It’s very clear that every OE has responsibility to that owner, to that vehicle, throughout the lifetime of that vehicle,” Mayer said.

He also theorized that the service might raise customer satisfaction and cut cycle times, which means GM at the very least knows what the collision repair/auto insurance magic words are these days.

Only collision parts are included in MyPriceLink, and not all of them made the cut. GM has about 92,000 collision parts in its portfolio, and only 7,000-8,000 were identified as “highly competitive parts,” according to Mayer. “We’re not eliminating list price, first of all,” Mayer said. The list price will just change on a “per-estimate basis” if GM feels it can be competitive with non-new OEM vendors.

The “highly competitive parts” should essentially match those in the Conquest program now, but GM gets to be “competitive up front” with its Conquest budget instead of “after the fact, in a clunky way.”

Insurers drive the aftermarket parts usage with which GM is competing, but “five of the major carriers,” representing half of the auto insurance market share, have joined the pilot, according to Mayer, who wouldn’t give names. (Those who enjoy logic puzzles might want to try adding up combinations of the nation’s top carriers, whose 2014 insurer market share can be seen here, to do some idle speculation about which five could be involved.)

“We feel like we have a pretty good representation,” he said.

As for the privacy concerns with GM’s integration with the estimating services, Mayer stressed that GM — really, it’s OEConnection that’s the clearinghouse, he said — doesn’t get proprietary information.

“That would take a lot of bandwidth,” he said, and “we don’t have a need for all that data.”

GM only needs certain fields transmitted, such as VIN number, age of vehicle and mileage.

“It helps us render a price,” he said.

Looking at another concern, Mayer said he didn’t see how MyPriceLink could disadvantage a smaller auto body shop. General Motors doesn’t want to make one of its customers shop around for the lowest price, he said, and so “we’re not trying to disadvantage a shop from that standpoint”

He also said GM understood the need for it, suppliers and collision repairers to all earn a margin.

“We don’t plan on doing anything stupid or crazy,” he said.

Besides noting the interest in MyPriceLink shown to GM and OEConnection by other OEMs — “as long as it works,” he said with a laugh — Mayer threw out a few ideas for the future of the program which would leverage its stronger GM-IP connection. (For other NACE panelists’ views on other OEMs and dynamic pricing, check out this RDN coverage.)

“If we can do dynamic price, we can probably do some of those other things just as easy,” he said.

For example, he said, some VIN decoders aren’t as good as they could be, leaving shops trying to figure out what options exist on the vehicle. But GM can look at the VIN number, know exactly what it contains, and commuicate that information via the estimating service.

Another option could be communicating repair information to the shops via their estimating service, something Toyota and Tesla are already doing with Mitchell and AudaExplore, respectively.

Mayer also floated some ways in which insurers could be helped by GM, such as telematics and crash notifications via OnStar or coming up with a solution when an underwriter tells GM, “We could really use some better service levels in this part of the country.”

Auto body shops should also see efficiency gains with MyPriceLink, according to General Motors. But dealers will see a workflow increase, as this diagram from the GM booth at NACE indicates. (John Huetter/Repairer Driven News)