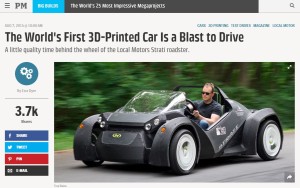 Recent reports in Popular Mechanics and Wards Auto offer some glimpses of the future of automotive 3-D printing, a potentially carbon-fiber-intensive technology with the potential to alter collision repair.

Popular Mechanics’ Ezra Dyer test-drove Local Motors’ Strati, which includes an carbon-fiber body printed in 40 hours, runs on an electric motor and sits on an aluminum frame. In an Aug. 7 article, he noted the raggedy appearance of the roadster, but also that the sides resemble the BMW i3.

“We milled the sides to show how that would look,” Local Motors CEO Jay Rogers told the magazine. “Some of the other parts are just how they came out of the printer, so you can see that. But we can make it look however we want. You could put a vinyl wrap on it and the car would still be completely recyclable.”

Dyer mused of the potential for the Strati, which he called “fun”(“Put a Mitsubishi i-MiEV motor back there and this thing would be a riot.”), or any of the other models the startup automaker wants to create in a paragraph worth noting by collision repairers:

Thanks to the nature of 3D printing, where the car is built in layers squirted from the nozzles of a massive printer, you can embed energy-absorbing crash structures or superstrong seat-belt mounts that are anchored deep in the body. You could bond springy bumpers to cushion pedestrian impacts (right now Local is experimenting with a printable elastic polyurethane material called NinjaFlex). And if you managed to catastrophically damage the tub, you could unbolt the motor and suspension, melt the car down, and print a new one. Of course, the Strati parked in Knoxville doesn’t even have seat belts, but it’s proof of concept.

The two-seater, Dyer writes, could be done for as low as $5,000 (though he wishes the motor were better).

In it, Crounse calls 30 percent of auto parts being printed at dealerships “viable” and offered some possibilities based on what wouldn’t be printed

“It’s not sheet metal or complex emission components,” he said in the Wards Auto piece. “It’s some engine components, but not others. It’s some interior parts, like air vents.”

Crounse was more bearish on printing 3D cars, though he noted more single-piece parts (instead of assemblies) was possible.

“If you are building low volume and you want to customize the car to each person and be able to do a new model every six months, there’s a place for 3D printing,” Crounse said, according to Wards Auto. “Mass manufacturing of vehicles is pretty mature and hard to compete with. But in manufacturing, 3D printing can produce more 1-piece things that currently are built as assemblies. In that regard, you will see more 1-piece printings go into production vehicles.”

In terms of collision parts, Crounse estimated it wouldn’t happen at first for safety-related parts, but he did project a more near-term future where an OEM warehouse doesn’t keep hundreds of thousands of parts on hand; instead, it has one part available for immediate shipping and then prints another one “overnight,” according to Wards Auto.

“Whoever gets their foot in the door and doesn’t mess up with poor quality parts is going to have an advantage,” Crounse says in the Wards Auto. Q&A. “You (OEMs) don’t want to get caught by surprise when an aftermarket competitor comes out with an offering that allows the printing of parts at the dealer or in a particular market.”

“3D Printing Will Change Auto Industry, From Manufacturers to Dealers”

Featured image: Recent reports in Popular Mechanics and WardsAuto offer some glimpses of the future of automotive 3-D printing, a likely carbon-fiber-intensive technology with the potential to alter collision repair. (Screenshot from www.popularmechanics.com)