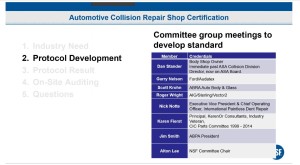 Though a new certification program which equates quality repairs with following OEM procedures (if not necessarily specific OEM equipment brands) rather than indirect factors like KPIs is an admirable concept, the pedigrees of its developers and auditors might make some shops and automakers wary.

Careers of parties involved in the certification program’s protocol and execution include the kind of industries automakers and some shops have criticized as bad for drivers: insurers and aftermarket manufacturers. The panel creating the NSF protocol also includes members with history in the controversial collision repairer MSO subset.

“As an internationally recognized developer of more than 90 public health and safety standards, NSF International’s role is to convene world class experts in a given field and facilitate the development of the protocols and standards by which certification is offered,” Frayer said in a statement.

“Specific to the development of the Automotive Collision Repair Shop Certification protocol, the inter-industry experts who served on the NSF technical committee have well over 130 years of combined collision industry experience in the areas of collision repair, training (I-CAR) and standard development.

“For over 70 years, NSF International has been facilitating the development of standards, conducting audits, providing training and education programs for a wide range of products for the automotive, food, water and consumer goods industries to minimize adverse health and safety effects and protect the environment (nsf.org). NSF is committed to protecting human health and safety worldwide.

“With the addition of the repair shop certification, NSF is providing a comprehensive program for the entire supply chain including manufacturers of automotive parts, collision parts distributors and now collision repair shops as well. Given the voluntary nature of this program, the market will ultimately judge the value of the program.”