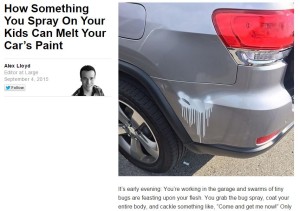 We don’t know if we can take credit, but a Yahoo Autos post we’d criticized for an erroneous quote about collision repairers has replaced the passage with an accurate one.

We’ve revised this story to reflect that.

The Yahoo Autos post Friday describing how bug spray can ruin car paint is a fun read, but an initial draft erred slightly in its portrayal of body shops.

Since it was on a major news site and likely to go viral with a headline like “How Something You Spray On Your Kids Can Melt Your Car’s Paint,” we thought Friday we’d offer a small clarification for our admittedly fewer readers to share too.

The initial version by Indianapolis 500 driver Alex Lloyd cited YouTube auto guru Chris Fix, who explains why you shouldn’t use bug spray to clean your headlights because it’ll ruin the surrounding paint. All well and good. But then it continued:

We can see how accidentally leaving the solution to dissolve the car’s clear coat overnight can cause such vast damage, which can be costly to repair. “The problem is I’ve never seen a bodyshop only offer to refinish the clear coat,” Chris says. “Typically they’ll demand you repaint the whole car, and that can cost thousands.”

It has since been revised:

We can see how accidentally leaving the solution to dissolve the car’s clear coat overnight can cause such vast damage, which can be costly to repair. “The problem is most places wont want to just touch up the clear coat because there could be damage to the base coat or lingering bug spray which would cause any new paint to bubble up,” Chris says. “Instead, they would probably try and sand down and repaint the whole panel.”

Which is a welcome development. The initial quote seemed to imply collision repairers are either incompetent or unethical, when in reality shops repaint individual panels all the time. Insurers sometimes don’t even want to pay to blend the paint into an adjacent panel, resulting in a “butt match” where the color on the refinished panel can be distinguished as slightly different from the ones next to it.

There’s also a hesitation by some insurers to apply clearcoat all the way up a C-pillar to the next panel break — as required by paint manufacturers to preserve the warranty. Instead, it is blended into the paint of the undamaged part of the part. It looks fine at first, but over time, the place where the clearcoat blending ended can be noticeable. (See our gallery.)

Now, the refinish can get costly — that’s certainly true. A shop would have to remove everything attached to a panel to do the work. They might also have to refinish more clearcoat and basecoat on the panel itself and blend the color to adjacent panels, depending on the damage and what the customer was willing to spend. (See the butt match and C-pillar examples above.)

“So when this item is inevitably forwarded to you, you’ll be able to at least tell the sender that your shop is in fact willing and able to refinish only part of a car,” we wrote Friday.