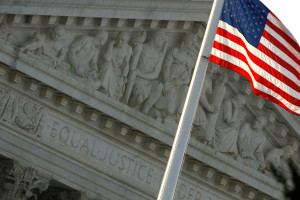 The Supreme Court on Monday declined to hear an aftermarket supplier’s petition to reconsider a January Fifth Circuit Court of Appeals ruling in favor of General Motors’ “Bump the Competition” pricing.

In the “Bump the Competition” program, dealers like All-Star sell OEM parts to auto body shops for less than cost. That way, the shop picks a new OEM component over an otherwise cheaper aftermarket part demanded by insurers.

The shop has a lower baseline from which to mark up their own price, but the customer at least gets a OEM part.

GM at the time of the case had given the dealerships a rebate for the difference between cost and the reduced price charged the auto body shop and tacked on a 14 percent profit on the original price as an incentive.

Felders had told the original Middle District of Louisiana court that its income fell from a peak of about $3 million in 2008 (before the GM program began) to about $2 million because of GM’s tactics. Some day, it argued, GM could drive it out of business. But as Felder’s noted following a district court inquiry and All-Star pointed out to the Supreme Court, LKQ subsidiary Keystone has survived despite the GM competitive pressure.

Felder’s had asked the Supreme Court to hear the case to rule on whether the rebate counted when determining predatory prices, noting to the Fifth Circuit and and Supreme Court that the case turned on that point of law.

The Fifth Circuit had already ruled that the rebate (and profit) kept the transaction from falling below the supplier’s average variable cost and thus wasn’t predatory.

“If the rebate were irrelevant as Felder’s contends, then Felder’s complaint would be sufficient on this issue because it alleges that ‘at the point of sale to body shops and collision centers, the All Star Defendants and the John Doe Defendants 1-25 sell collision parts lower than their average variable cost’ and that ‘at the time of sale, the price of the good sold was less than the cost to All Star Defendants or the John Doe Defendants plus the costs of selling that part,'” the appeals court wrote.

… “We agree with the district court that the rebate should be considered in the predatory pricing analysis. The price versus cost comparison focuses on whether the money flowing in for a particular transaction exceeds the money flowing out. The rebate undoubtedly affects that bottom line for All Star by guaranteeing that it makes a profit on any Bump the Competition sale. That undisputed fact resolves the case.”

Correction: An earlier version of this article contained incorrect information about GM’s MyPriceLink program; the passage has since been deleted.