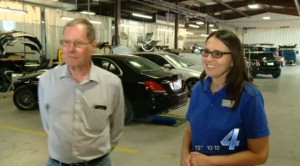 An Oklahoma City-based TV station has warned viewers about parking lot offers to eliminate dents and gives a nice plug to legitimate collision repairers in the process.

“Tell them (scammers) to get lost and leave the real repairs to the professionals,” KFOR reporter Scott Hines says in his advice to viewers.  (He also encourages not buying something from someone approaching you in a parking lot, and it’s kind of sad Americans still need to be told that.)

Katherine Espinosa called the WFOR “In Your Corner” team after two men claiming to be body shop mechanics offered to fix her SUV’s dents in a half-hour.

She took them up on their parking lot offer and ultimately paid “hundreds,” according to the KFOR broadcast posted Tuesday.

Espinosa told the station she agreed to let them follow her to an AutoZone, where they bought spray paint and wax and “fixed” the car in 20 minutes by applying wax to the dents and telling her to keep it on for a day.

“It just looks all scuffed up,” Espinosa tells KFOR in the video. “… Now it’s duller than it ever was.”

Krisi Wano of G.W. and Sons Auto Body told KFOR that depending on the damage, the repair would more likely take three or four days.

“There is no telling what they used,” Wano says on the broadcast. “If it’s in a can, you’re going to say Kryolan or something.”