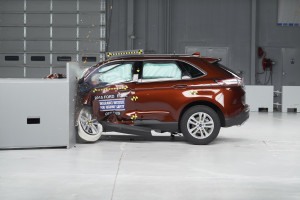 Though collision damage severity will likely grow further, insurers might want to take care not too many vehicles are written off as total losses, new J.D. Power research released Monday indicates.

Towed or total-loss vehicles are (not surprisingly) particularly likely to reduce customer satisfaction scores given auto insurers, the organization found. And other data indicates cars are becoming less and less driveable following wrecks.

Thus, J.D. Power’s findings indicate insurers might need to review total-loss policies to avoid alienating too many customers amid these trends. (Or to assist the environment, as one expert suggested.) That’d mean more repair work for auto body shops.

Driveable, repairable vehicles only made up 60 percent of claims in 2015, down 9 percentage points from 2011.

“There has been a notable increase in the number of severe claims—those requiring a tow or deemed a total loss—over the past five years, and claim severity affects customer satisfaction,” J.D. Power wrote in a news release Monday.

There’s still time to sign up for SEMA events! Those wanting to learn more about estimating and/or insurers should check out “Aluminum Damage Analysis and Joining Methods” with Larry Montanez of  P&L Consultants, “The Myths, Mysteries and Fallacies Surrounding Accurate Repair Planning with Bob Gilbert of AkzoNobel, “Post Repair Inspections” with Larry Montanez of P&L Consultants and “Don’t Let Consolidators and MSOs Steal Your Insurance Work” with Michelle Nelson, B2B Automotive. The presentations are part of the Society of Collision Repair Specialists’ Repairer Driven Education series Nov. 3-6. Register here.

Customers who could still drive the car to a collision repairer scored their overall claim experience 870, far above the industry average of 857, indicating “insurers are doing a good job managing these claims,” J.D. Power insurance industry analytics Director Mark Garrett said in a statement.

The 857 industry average itself was unchanged from the 2014 Auto Claims Satisfaction Survey.

“So, while the volume of repairable cars needing to be towed has increased, insurers are receiving higher marks for their servicing of these claims,” J.D. Power wrote.

We’d guess that advances in energy distribution from a crash are to blame for the increasing severity of untowable vehicles.

Newer models are designed to spread the force from the impact away from the passenger compartment, which is great for keeping occupants alive but makes for a messier-looking car. Greater engineering thought likely was demanded following the Insurance Institute of Highway Safety’s 2012 introduction of the tricky small-overlap crash test.

Another 17 percent of policyholders saw their vehicles deemed a total loss, cutting their satisfaction to 811, the lowest score since 2011. (J.D. Power didn’t say specifically what score was registered that year.)

Total loss scores might also have increased because severity itself has been increasing, as Americans buy newer cars post-recession equipped with more expensive technology, such as backup cameras.

Between what J.D. Power classifies as “delighted” (overall scores of 900 or higher out of 1,000) and “displeased” (549 or lower), the majority of customers start switching carriers. About 83 percent percent of delighted customers  “definitely will” renew their policy; only 10 percent of displeased ones say the same, according to J.D. Power.

Garrett said about 700 seems to be the tipping point where it’s a “flip of a coin” whether customers say they want to renew or not.

But somewhere between that 700 and scores like 900, you reach places where customers aren’t as sticky.

“They may shop a little bit more,” Garrett said.

That seems to be problematic not only in retaining customers but also in signing up new customers if customer satisfaction scores are considered prior to the decision.

The most satisfied policyholders came from Auto-Owners and Amica, far above their peers at 893 and 885, respectively. Third- and fourth-place Southern California Insurance Group and Hartford only scored 871 and 870. Lowest was MAPFRE-Commerce at 804, far lower than second-to-last Esurance at 825. 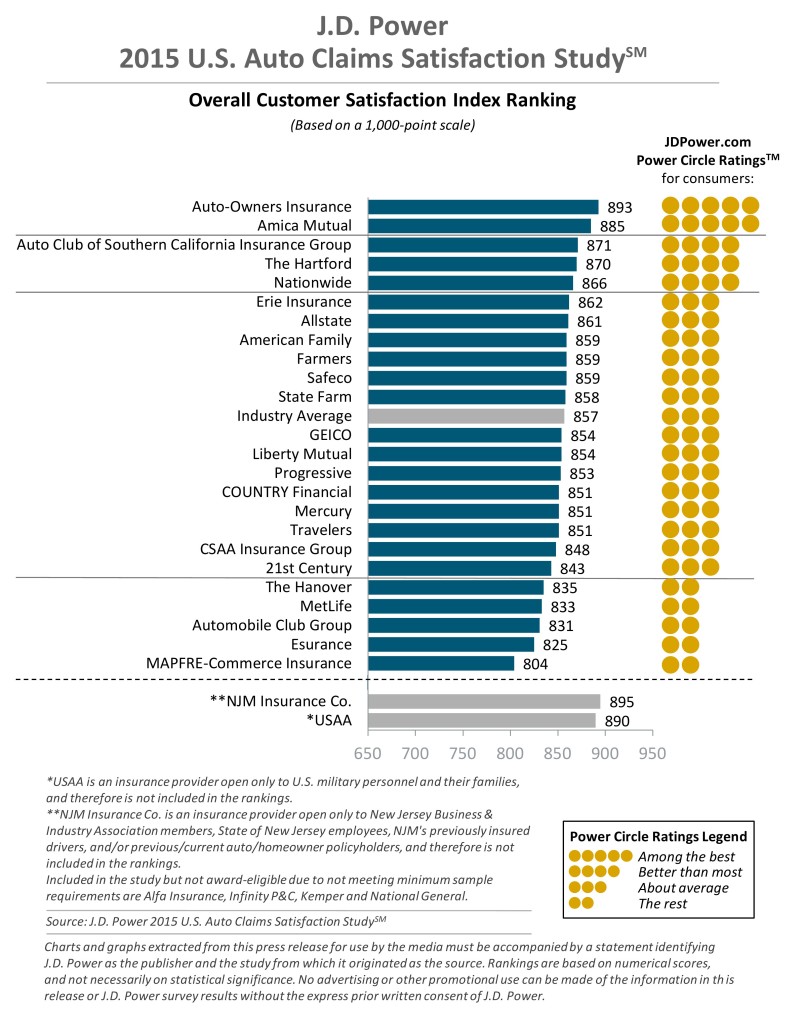 The 2015 Ford Edge, rated a Top Safety Pick by the Insurance Institute of Highway Safety, experiences a crash test. J.D. Power found in its 2015 claims survey that more vehicles are being deemed total losses and repairable but undriveable compared to its 2011 study. (Provided by IIHS, file)

Customers who could still drive the car to a collision repairer scored their overall claim experience 870, far above the industry average of 857, indicating “insurers are doing a good job managing these claims,” J.D. Power insurance industry analytics Director Mark Garrett said in a statement. (Provided by J.D. Power)