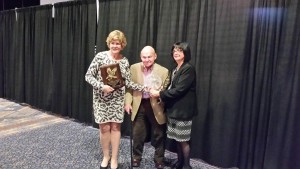 CARSTAR Mundelein co-owner Jeanne Silver was named Wednesday to the collision industry’s Hall of Eagles, the first hall of fame inductee since 2012.

“I’m so, so honored to be here. I finally got my wings,” Silver said after receiving the award from Bob “Cowboy” Smith, a 2002 Eagle.

She joins her husband, shop co-owner Jeff Silver, in the hall. Jeff Silver was inducted in 1993.

Presenter Rick Tuuri, AudaExplore vice president of industry relations and a 2000 honoree, noted the rigor of the induction process. An Eagle must nominate a new Eagle, and two-thirds of the membership must vote in favor of the honor.

Jeff Silver himself — “considered by some to be the father of I-CAR,” as National General material damage Vice President Joe Laurentino put it — won the I-CAR Chairman’s Award on Wednesday.

“I have enjoyed the entire time I spent in all parts of this industry,” Jeff Silver said. “Thank you, thank you all.”