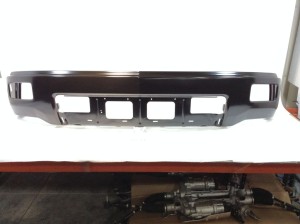 The concept of “Opt-OE”/”Surplus OE”/”Alt-OE” — OEM-sanctioned surplus or reconditioned parts — blurs given the ability of suppliers to list anything with such terms on IP-linked parts databases.

To find out more about what was actually categorized like this on the market, we checked with two suppliers which had drawn repairer attention for such classifications. We sought to find out a little more about what vendors were advertising along those lines.

One, Phoenix-based Courtesy Chevrolet, said it sells discounted new GM parts as “Opt OEM” or “Alt OEM” parts, an example of a broader dealership trend APU noticed during the recession.

“We only sell Genuine GM replacement parts, we do not sell recycled, counterfeit, foreign or stolen parts,” Courtesy Parts Manager Mark Skinner wrote in an email.

The other, the mammoth Iowa-based operation Rydell Surplus OE Parts, said it sells “Surplus OEM” parts through official Opt-OE programs if they exist — and more than 98 percent of the time, that’s the case.

However, the supplier said it also buys extra parts from Tier 1 OEM assembly line suppliers and calls them “Surplus OEM.”

Defining those Tier 1 parts or even the new OEM parts as “Opt-OE” or a similar term is potentially more controversial. (For the purposes of this article, we’ll from here out use solely the term “Opt-OE” to refer to all such programs, OEM and vendor-created.)

Both Courtesy and Rydell cite the discount and the fit and finish of their unofficial Opt-OE parts compared to aftermarket. After all, one is selling new OEM parts, and the other is selling parts which nearly were new OEM parts.

But by they and other suppliers expanding the scope of an “Opt-OE” part beyond the formal OEM definitions, it’s also harder for repairers, insurers, and drivers to know what they’re getting when such a part is advertised.

Skinner wrote that the company was participating in an “‘Opt OE’ Program … along with Rydell Chevrolet, in Iowa.”

However, he indicated Courtesy is actually selling new parts at a discount as Opt-OE, a practice Rydell national accounts manager Terry Westedt said Rydell doesn’t follow. Westedet said it’d be a mistake to sell a new part as anything other than new.

Skinner provided us a copy of email answers to a similar Opt-OE inquiry by the Society of Collision Repair Specialists.

“These are Genuine GM Parts that Courtesy Chevrolet is taking advantage of volume discount programs from the manufacturer, to compete against the Aftermarket Parts,” it wrote.

“We are simply offering competitive pricing of Genuine GM, parts, to provide OE  quality (Fit and Finish) parts,   that will help promote a  more timely repair, for improved Cycle Times.”

Skinner did not respond to a follow-up email asking for comment about the impact this could have on the definition of Opt-OE or if any other new OEM parts were classified as such by Courtesy.

Some companies are very strict about how retailers price new products — Apple, for example (See this insightful 2013 MacWorld article.) — presumably out of price erosion and brand concerns. Considering that shops also have a margin to protect, the price erosion factor could be a concern at the end of the supply chain too.

But other retailers are less hardline, selling the item wholesale to a retailer and offering little other input besides an MSRP. What the retailer sells it for is the retailer’s business.

General Motors wholesale dealer, customer care and aftersales manager John Eck said the company has little input on what a dealer does with a part once the automaker sells the component to them.

“General Motors sets suggested list and trade prices; however, to this point we (GM) do not get involved in how dealers price or the final transaction pricing in the marketplace,” Eck said in a statement.

He declined to comment on the idea of new GM parts being sold as Opt-OE.

Asked about both these concepts (new-part pricing and part definitions), a representative of the Alliance of Automotive Manufacturer wrote in an email that “the industry doesn’t have a consensus position on the sale of Opt-OE or surplus OE parts by franchised dealers.”

That’s 98 percent of the parts vendor’s Opt-OE business, he said. Since GM Outlet Shop carries the official blessing of GM — though not its warranties — there’s nothing confusing there. (Rydell offers its own warranties parts.)

“Any GM dealer can get on the program and sell surplus parts,” Westedt said. Rydell just happens to sell a lot of them.

Ford also has a Opt-OE program in which Ford Component Sales sells parts to the standalone, independent OE Reman Direct program. It in turn sells them itself, ideally to dealers.

As Westedt said Rydell uses official Opt-OE channels when they exist, its hundreds of Ford collision parts are presumably through that approved OE Reman Direct route. Again, nothing unexpected.

But FCA, Toyota, Hyundai, and Honda have confirmed to us or SCRS that they have no such programs for collision parts. Nissan only sells Opt-OE radiators. (Some of these OEMs have Opt-OE or remanufacturing programs for mechanical parts, however.)

So when Rydell has listed one of those OEMs’ collision parts (except for the Nissan radiators) as Opt-OE, they’re purchased directly from Tier 1 suppliers who because of either blemishes or excess product didn’t provide them to OEM assembly lines, according to Westedt.

“We’re always looking for opportunity and new product,” he said. Rydell does vet the parts and Tier 1, ships parts back and has dropped suppliers if their product was “inferior” or Rydell didn’t feel “comfortable with it,” according to Westedt.

Because of the assembly-line nature of Rydell’s Tier-level surplus, it’s possible some of those parts are in different stages of assembly, he said.

That might have accounted for the discrepancies Hyundai in a lawsuit said it found in Rydell’s Hyundai parts, according to Westedt. The two parties have since settled the lawsuit, and Westedt said Rydell is “completely excited about” an upcoming Hyundai visit to the site.

Westedt was adamant that none of his company’s parts were aftermarket, recycled, counterfeit, etc.

“We can account for where every piece of our product comes from,” Westedt said. “… I don’t buy from peddlers off the street like some guys do.”

As the aftermarket industry often says that the same plants used by OEMs also make aftermarket parts, what keeps a factory from pulling a fast one on Rydell?

“Our people are trained very well to catch any knock-offs,” he said.

We asked Westedt if expanding the definition of Opt-OE/Surplus OE beyond OEM-approved programs like that opened the door for less scrupulous suppliers — like those competitors he described — and a grey market to abuse the term.

“You could say that about anything,” he said. Anyone could call a part aftermarket or try to pass off a counterfeit part as new, for example.

Westedt also tossed the question back: What else would you call Rydell’s Tier 1-sourced parts?

“We’re helping to define what the market is,” he said. “… Others aren’t doing that.”

Reinforcing Rydell’s point, both Ford and GM draw some of their official Opt-OE parts from Tier 1 suppliers as well. However, the OEMs are presumably better qualified to vet excess or blemished supplier parts and have more of a reputation at stake if there’s a problem.

Should an OEM have a problem, it should contact Rydell, Westedt said.

“We always work with all the OEs” who do, he said.

“We’re always more than willing to open our doors, open our books,” he said.

Overall, Opt-OE is “just a fraction of the parts industry,” Westedt said, and third-quarter Mitchell data indicates it’s indeed been pretty dead compared to new, aftermarket, and recycled (in that order).

But while Opt-OE doesn’t have a prayer of catching up to Rydell’s new-parts sales, “absolutely, we see some growth potential there,” he said.

“It certainly does compete with aftermarket,” Westedt said, calling the contest at a “higher level against a lower-grade product.”

A 2014 Jeep Cherokee front fascia for sale by Rydell Surplus OEM Parts is shown. Rydell says it gets all “Surplus OEM” parts not offered through official OEM programs from Tier 1 suppliers. FCA has no formal Opt-OE program. (Provided by Rydell)