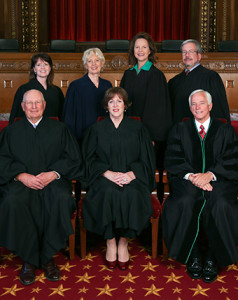 The Ohio Supreme Court on Tuesday upheld a state law stating that insurer interactions with customers weren’t transactions under the Ohio Consumer Sales Practices Act — even though another part of the law specifically relates to non-OEM parts on insurers’ estimates.

The 5-2 decision reversed earlier court decisions in favor of Jerry and Nancy Dillon against Farmers.

“My clients and I are very disappointed with this ruling … a consumer avenue to dispute the insurance companies’ actions has been cut off,” attorney James Skelton told the Columbus Dispatch in a Tuesday article.

After the Dillons hit a deer, Farmers wrote an estimate using aftermarket parts and gave it to the Dillions Collision repairer, Mission Auto Connection.

After Mission Auto told the Dillons the estimate called for non-OEM parts. Jerry Dillon called Farmers and demanded only OEM components be used. Farmers pointed to the Dillons’ policy, which allowed alternative parts, and sent an estimate to the Dillons.

However, by the time it arrived a week later, Jerry Dillon had already told the shop to use OEM parts, agreeing to pay the approximately $1,500 difference out-of-pocket and seek to recoup it through litigation.

The Dillons were initially successful, winning a summary judgement on the technicality that they never signed the insurer estimate specifying aftermarket parts as required under Ohio law. The trial court awarded the duo $30,613.66 in damages, triple damages, and expenses.

Farmers petitioned the Ohio Fifth District appeals court, which found that while the damages should have only been $29,092.59, the Dillons still deserved to win the case.

Here’s where it gets complicated and why the Supreme Court took the case following another Farmers appeal.

The Fifth District appeals court struggled to resolve what it saw as an inherent contradiction of three parts of the Ohio Consumer Sales Practices Act:

So if insurer actions aren’t meant to be addressed with the Consumer Sales Practices Act, why is the aftermarket clause included in the law? The appeals court decided to settle this seeming paradox by ruling the aftermarket clause won because it was more specific and was enacted after the insurance exemption. Farmers appealed, arguing that the exemption took priority and besides, any estimate prepared under the insurance policy’s terms and orally disclosed to the policyholder shouldn’t be considered an “unfair or deceptive act or practice.”

The court in the opinion by Chief Justice Maureen O’Connor agreed with Farmers on the exemption point, and reversed the case on those grounds alone. Because of this, it didn’t bother examining or ruling on the second part of Farmers’ argument; that legal question will have to wait for a future legislative session or lawsuit to be answered.

The Supreme Court’s rationale does work under a strict interpretation of the law and an understandable hesitancy to try and guess the intent of a past Legislature. But shops might wonder if they went far too “letter of the law” over “spirit of the law” here:

According to the Supreme Court:

Rules specifically related to insurers which are

can’t actually be enforced under that act.

You know who can be punished under the Consumer Sales Practices Act for the insurer’s handling of estimates with non-OEM parts?

Shops, according to the court’s interpretation of the law.

“A cause of action remains under R.C. 1345.81(E) for damages against repair facilities and installers, both of whom can be involved in consumer transactions as defined in R.C. 1345.01(A), and both of whom are also governed by R.C. 1345.81,” O’Connor’s majority opinion states.

(As if you didn’t have enough problems.)

However, the court note that insurers aren’t off the hook if they violate the law regarding estimates. Consumers still can go after those companies — they just have to do so under other grounds.

“And a policy holder is not without remedy against an insurer who violates R.C. 1345.81 simply because no remedy is provided by R.C. 1345.81(E),” O’Connor wrote. “A ‘consumer may seek a declaratory judgment, an injunction, or other appropriate relief against an act or practice that violates’ R.C. Chapter 1345. … The CSPA also permits consumers to bring a cause of action ‘under any other theory of law’ that would be applicable to the transaction.” “While I agree with almost everything said in the majority opinion, I simply cannot agree that the Supreme Court of Ohio is in the business of encouraging insurance companies to intentionally disregard the Consumer Sales Practices Act to the detriment of their customers,” O’Neill wrote. “Therefore, I respectfully dissent. …

“I agree with the majority that the consumer transaction in this case is not the insurance-policy agreement between Farmers and Dillon. However, once an insurance company undertakes the role of adjuster in a collision repair, there is no justification to shield it from liability under the CSPA for its actions in connection with that consumer transaction merely because it is an insurer. Doing so is unfair to consumers and to the repair facilities and installers that follow the law, and it ignores the intent of the Ohio General Assembly when it enacted the CSPA.”