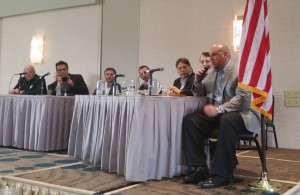 Collision repairers and dealerships will probably have to contend with a fragmented electronics parts procurement system for the near future, based on the discussion Thursday by a panel of procurement software firms.

Though virtually all of the nine panelists agreed that integration with each other was possible, there seemed to be little appetite among them to assist a competitor, panelists indicated. (We might be wrong, but there seemed to be a sense of “Yeah, I’ll take your supplier and parts data to make my system better, but I’m not giving you mine.”)

Parts Committee head John Bosin of I-CAR said 10 parts companies were asked to participate, with one dropping out as late as a break that day.

“It has been a little bit like herding cats,” Bosin said.

Moderator Frank Terlep, the CEO of eMarketing Sherpas, asked the panel what the solution would be for a hypothetical shop who wants to use OPSTRAX for an OEM part, but must use OEConnection for a discount and PartsTrader because State Farm makes them. How can that be streamlined? he asked.

“We’ve solved it technically,” uParts CEO Alex Adegan said, but systems are often open on only one end.

Beyond this, different suppliers have different allegiances.

“This has been the challenge,” he said. OPSTRAX CEO Bossinakis agreed that the business side was the “biggest inhibitor” to electronic efficiency.

It might be disingenuous to expect otherwise. No parts procurement business wants to acknowledged that they were making money, he said, noting that OPSTRAX’s business involved signing up suppliers and selling subscriptions.

Consumers use multiple apps on their cellphone, Bossinakis pointed out. (And it’s true: You don’t expect Craigslist, Google Shopping, Amazon, and eBay to integrate.)

Terlep, who did a nice job of grilling everybody, then asked: What if the parts manager leaves the shop, forcing a new or existing employee to be trained on nine procurement systems?

“There’s a big toll on the shop,” Terlep said.

“I think that’s too idealistic” to use a single system, Bossinakis said.

OEConnection OEM programs Vice President Bill Lopez agreed, noting that OEConnection — which sees the same tangle on the dealership side — defers to the marketplace. (Even the “bi-directional” OEConnection-PartsTrader partnership was still “two bridges away” from dealerships dispensing with having to use both systems, according to Lopez.)

Dealer workflows were slowly being streamlined, but “we’re sort of placing our bets” on the collision repair side, Lopez said. However, while there’s certainly a free-market case for procurement systems to stay siloed, this unwillingness to integrate might in some cases wind up costing the systems revenue. The more complicated the process, the less likely the industry could be to move from “call and fax.”

As CCC parts services group Vice President David Boden put it, a shop will just pick up the phone and call five vendors rather than bother to learn and check five systems.

There’s also a hesitation on the part of wholesalers to join procurement programs, as they have “anxiety” about their “relationship being commoditized,” Lopez said.

Some technical issues also existed, panelists indicated. Estimating service software for shops still uses the antiquated, data-exposing EMS CIECA standard (Accounts vary on which of those two parties bears the blame for that), while the rest of the industry uses the modern, secure BMS CIECA format.

Finally, there’s the issue of returns. Pete Tagliapietra of NuGen IT called it the largest problem. Car-Part.com CEO Jeff Schroder noted that the industry part return rate was 15-20 percent, when it should be 2-3 percent.