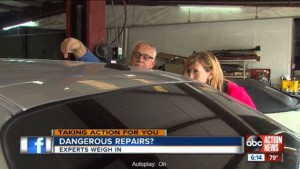 Share This:
A Florida woman has told a television news station that a GEICO direct repair shop inadequately handled the auto body work on her 2012 Dodge Challenger, though the insurer said the damage just shows she was rear-ended in another crash.

Three experts tied the damage to the DRP location’s inadequate on the car owned by Sheila New of Lakeland, Fla, WFTS reported Feb. 3.

New had been struck by another driver on the right rear side and followed GEICO’s recommendation about where to get it repaired, according to WFTS.

“I thought that they wanted you to go to one of the preferred shops because they were going to make sure your car was being fixed correctly,” New told the station.

He and auto repair expert Bill Byrne Jr. showed the station roof and frame buckling and at least one unwelcome gap between parts.

GEICO told the WFTS photos from the shop show none of that damage had been present during the repair, and New’s Challenger must have been struck again. New told WFTS that didn’t happen.

“Regarding the claims of additional damage to the frame rail, floor, quarter panel and the nonaligned parts, these items are consistent with a rear end impact to the vehicle,” GEICO said in a statement.

“… In fact, the shop that completed the repairs has photos of the vehicle during the course of repairs showing no buckles in the quarter panel or dents in the rear body panel.”

The broadcast also mentions the lawsuits filed by shops nationwide, noting that some of the collision repair experts were plaintiffs.

Unfortunately, they missed the fact that the Florida case has been dismissed with prejudice by a Central Florida federal judge.

However, related cases in other states have been appealed to the Eleventh Circuit Court; their success could raise hope for the tossed Florida A&E v. 21st Century lawsuit. A dismissal with prejudice can be appealed up the ladder; it just can’t be amended for a do-over before the court which dismissed it.

News reports like this have poured out of the woodwork since the lawsuits began gaining attention.

This one is interesting not just for drawing attention to some of the controversy and complexity of collision repair but because GEICO says it has documentation proving the DRP shop wasn’t to blame.

If GEICO’s right, then the broadcast’s moral switches from “beware DRP shops” to “photo-document your repairs in case an I-Team or a lawyer appears at your door.” (The latter’s not a bad idea either way.)

It’d be interesting to see those photos as well and how they compare to the findings of the experts contacted by WFTS which say the auto shop did an inadequate job.