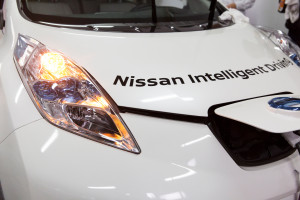 Ford on Monday said it would triple “semi-autonomous” vehicle spending and announced Traffic Jam Assist, which keeps a driver in their lane and following the car in front.

Of course, Nissan-Renault last month went one better, promising 10 “affordable, mass-market” models in the U.S., Europe, Japan and China with partial autonomy by 2020 — including the capability to self-drive on a freeway within the year.

It mentioned Nissan’s initiative and noted that Traffic Jam Assist — which really was just adaptive cruise combined with lane-keeping tech — was also available on a mass-market Honda Accord LX. It also pointed out that while Ford offers auto-braking in Europe, it failed to deliver on an earlier pledge to have U.S. auto-braking by 2015. (Ford now plans the American version for 2016.)

Then again, being ho-hum about a car which can keep tabs on its lane and another vehicle should tell us something about how far and how fast vehicle technology has advanced.

If Nissan delivers on its promise, it’s remarkably to see how quickly luxury car features come to the rest of us. For example, Tesla already features freeway self-driving (though the human is still liable) and the Cadillac CT6 will get it (Automotive News reported it’s been delayed until 2017).

“Renault-Nissan Alliance is deeply committed to the twin goals of ‘zero emissions and zero fatalities,'” Renault-Nissan CEO and Chairman Carlos Ghosn said in a statement. “That’s why we are developing autonomous driving and connectivity for mass-market, mainstream vehicles on three continents.”

Renault-Nissan vowed to have certain features by certain years, calling all these “at the option of the driver.” The wording makes it unclear if Nissan means to reassure owners the car won’t call an audible and start driving or the features are just options drivers can buy:

2016: The OEM partnership offers “‘single-lane control,’ a feature that allows cars to drive autonomously on highways, including in heavy, stop-and-go traffic.”

2018: Renault-Nissan owners have “‘multiple-lane control,’ which can autonomously negotiate hazards and change lanes during highway driving.” (Tesla’s Model S, FYI, can change lanes itself now if you hit the turn signal.)

Ford, however, also pledged semi-autonomy by 2020.

“We are committed to making autonomous vehicles available for millions of people,” Ford research and advanced engineering Vice President Ken Washington said in a statement.“Within well-defined areas and with favourable environmental conditions, we predict that fully autonomous driving will be possible within four years, and that autonomous vehicles will play a significant role in making travel safer, more enjoyable, and more accessible.”

Ford predicted that fully self-driving cars would probably first be available “in climates that support optimal sensor performance and in areas that have been mapped in high resolution 3D.” As Car and Driver joked: “In other words, California.”

Even if Fords and Nissans get smarter, we’re a long way off from losing all the other “dumb” cars — actually, it’s the dumb human drivers. That should keep body shops with plenty of work in the near-term — and in fact raise raise revenue in the instances where a tech-heavy vehicle is involved in a collision.

And possibly in the long-term; bodyshop reported a Thatcham expert’s prediction that cars with growing levels of autonomy might not kill off the collision repair industry after all.

That said, the sooner autobraking and other partial autonomy permeates the U.S. fleet, the sooner collision repairers start losing business and the risk equation — and consequently the ceiling for premiums — changes for insurers. Two mass-market OEMs heavily entering into the A.I. arms race will be something to watch in both industries.

Featured image: Nissan-Renault promised 10 “affordable, mass-market” models in the U.S., Europe, Japan and China with partial autonomy by 2020 — including the capability to self-drive on a freeway within the year. (Provided by Nissan)