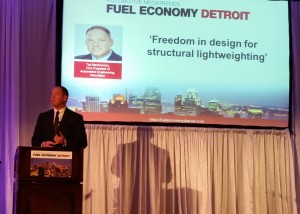 The strength and high elongation of NanoSteel and possibly other third-generation steels mean the metals can win back chassis hang-ons — and more importantly, dominate vehicle body structures for years, according to Machrowicz.  Engineers just have to be smart enough with their geometry, he said. (See his presentation slides here.)

“Geometry is king,” Machrowicz said. He said some industry macro studies commanding lightweight hype rely significantly on panel weight savings, and others rely simply on substitution of material properties. Geometry optimization based on available material properties is the key to achieving maximum and accurate mass savings, he said.

To use a highly simplistic example, think of those experiments in elementary school in which a “bridge” made of straws or toothpicks takes the force of a textbook or brick placed atop it. Maximize the geometry (triangles!), and the bridge stays intact and you get an A.

Machrowicz demonstrated the concept with the less simplistic example of the evolution of bumper beams.

Beams like Shape Corporation’s B section martensite beam took 25-30 percent weight out of older HSLA bumpers decades ago. Recently, Shape illustrated that further optimization could remove another 5-10 percent and achieve weight parity with aluminum designs; however, the A-tech hot-formed bumper introduced in 2004 on the Ford Mustang already reduced weight another 25-30 percent. These formed steel bumper designs are lighter than aluminum solutions, according to Machrowicz. 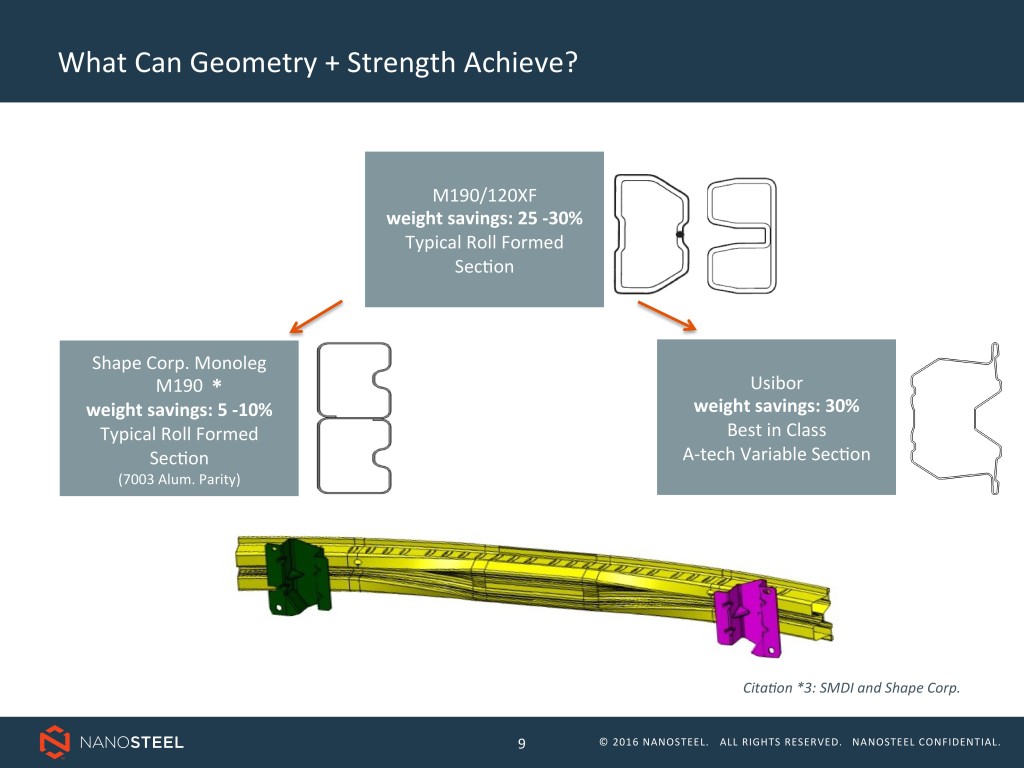 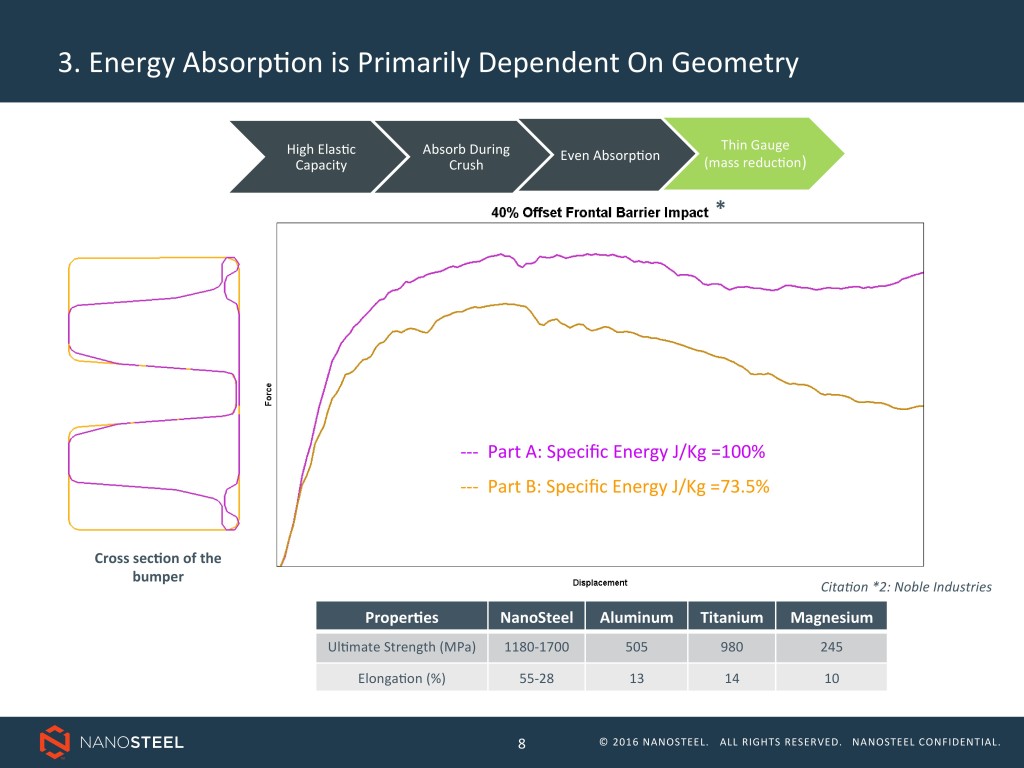 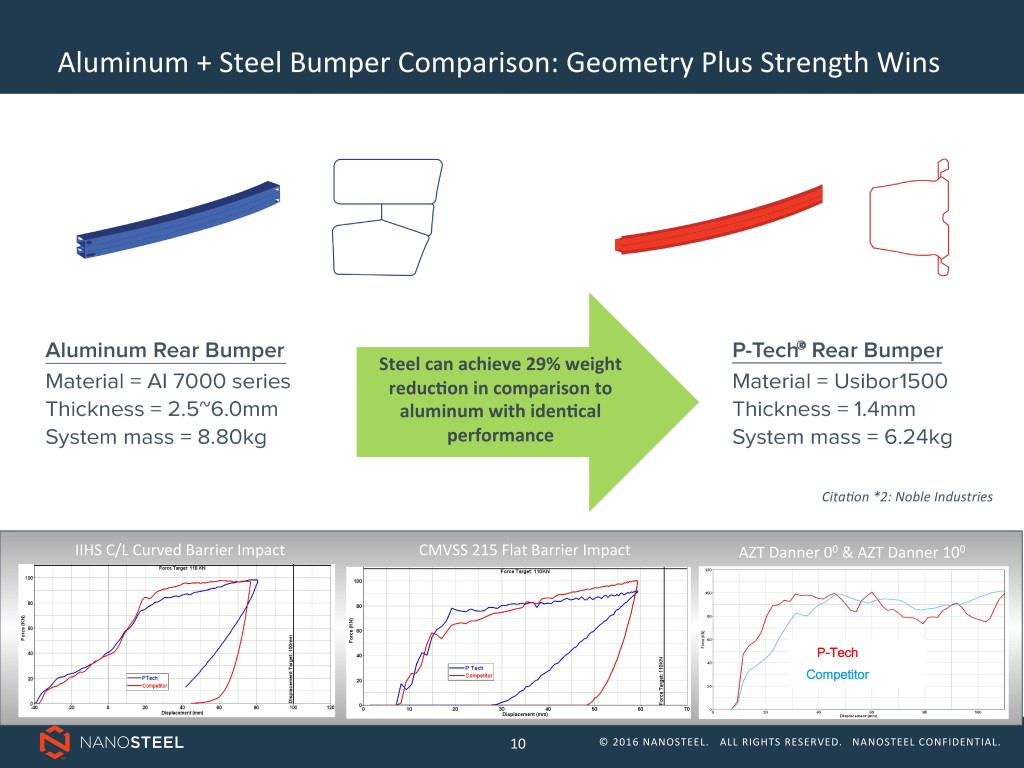 The A-tech bumper shape looks unusual, but the results are real in terms of energy absorption and collision protection. They have been possible and in production for a decade, but typically require the added cost and complexity of hot forming.

“It’s (steel is) not sexy, but it perfoms and is price-competitive,” he said in a statement.

“As a structures designer, I want geometry freedom,” he said in a statement. “That’s all I care about assuming strength is there, and strength has been available for decades.”

Design with geometry as well as grade and gauge — “3G” instead of “2G” —an EDAG study for the National Highway Traffic Safety Administration found a 2011 Honda Accord could have been much lighter when utilizing the strength and formability combinations of the latest advanced high-strength steels according to Machrowicz.

Machrowicz noted that Honda rightly rebutted the study, the OEM arguing that its structural engineers were hamstrung by certain considerations not accounted for by the researchers.

However, the overall conclusion that highly formable high strength steels can further reduce weight was still valid, Machrowciz said. He presented another EDAG study showing what could have been done with NanoSteel: a 30 percent increase in weight savings up from the original study’s 22 percent. In that case, the geometry was not re-optimized for NanoSteel’s formability; doing so could push the weight savings result higher, possibly to 35-40 percent, according to Machrowicz. 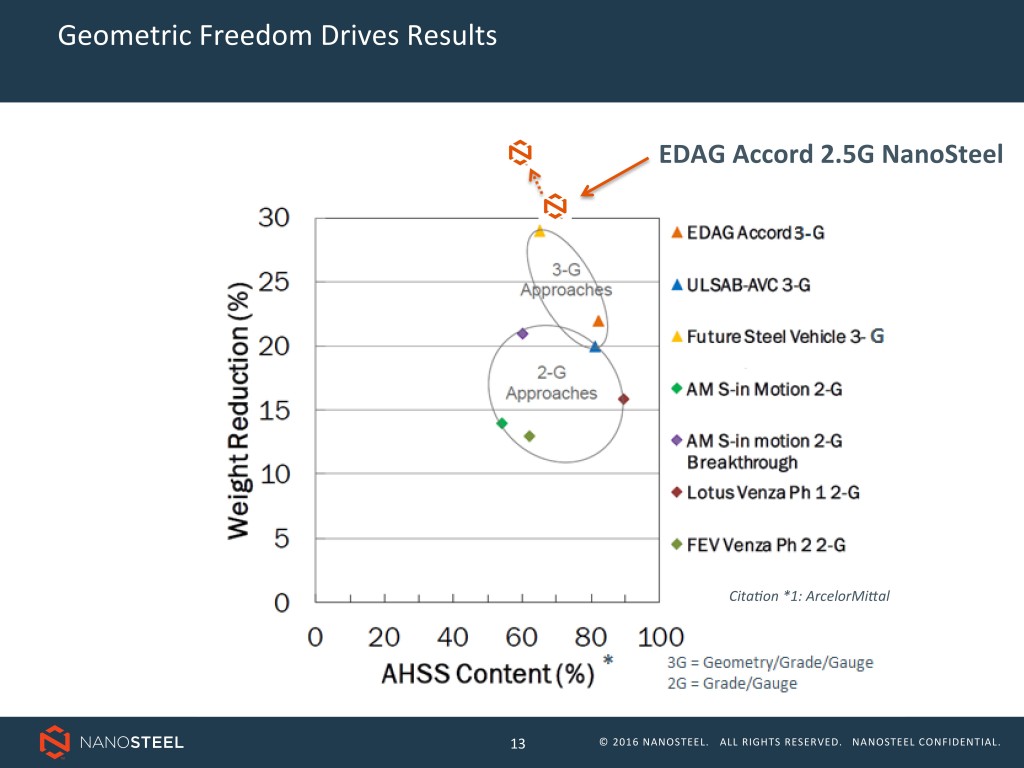 New steels can’t solve all of a vehicle’ need for weight reduction.

“Engineering for dent resistance is unrelated to the engineering problems faced by body structure” Machrowicz said in a statement.

OEMs simply can’t achieve the desired dent resistance at a low enough thickness for class A exterior panels with steel regardless of strength, according to Machrowicz

For example, steel panels run into dent resistance issues roughly around 0.65-0.7 mm, while aluminum gets dented around 1-1.2 mm, he said. But since aluminum is one-third as dense as steel, the OEM would have to hang a 0.4 mm steel panel compared to a 1.2 mm aluminum to maintain weight parity.  This won’t work. Aluminum can do the job, and 40-50 percent mass can be saved with aluminum class A exterior solutions.  Manufacturers can save weight here, but typically pay a premium to do so.

Cast aluminum and magnesium are likely to continue to own complex shapes like wheels, engines, powertrains and shock towers, Machrowicz predicted. It’s just too expensive to create these shapes out of sheet materials, even the more formable (higher-elongation) third-generation steels like his company’s NanoSteel, he said.

NanoSteel has begun to license its new steel globally, and an automotive OEM should begin working on it within the next year, according to Machrowicz.

“Now, you’re going to see the battle between engineers,” he said, and projected they’ll battle using metallic designs for 30-40 years.

But in 50 years or so, carbon-fiber would ultimately prevail for structural engineering, Machrowicz predicted.

Steel designs also can best aluminum in terms of absolute mass and protect occupants — so long as you can form complex shapes from high strength material — according to NanoSteel. (Provided by NanoSteel)

An EDAG study shows what could have been done with enhanced steel properties, NanoSteel on a 2011 Honda Accord: up to 30 percent weight savings. NanoSteel feels that further geometry optimization could provide up to 10 percent additional savings (Provided by NanoSteel)