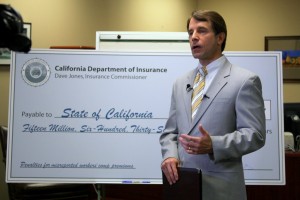 The California Department of Insurance has proposed clarifying and revamping state rules to curtail insurers from steering or unreasonably inconveniencing customers and personnel of a non-DRP shop.

Besides giving insurers better guidance on what the agency expected from the rules on the books, the regulations would truly define some nebulous terms like “reasonable” time or distance, leaving no room for intentional or unintentional breaches of either. They’ll also restrict insurers from forcing an inspection to be done at a DRP shop before a customer can patronize a non-DRP shop, and they’ll demand proof to back up any disparaging of non-DRP shops.

The DOI will take comments on the idea through April 22 and hold a public hearing that day. Learn more at the bottom of this article.

The Department of Insurance observed that despite a 2009 regulation which basically means steering is bad and should stop, DOI keeps receiving complaints about insurers doing it. The agency also notes the companion litigation to the California case, some of which is still in play or has been appealed.

“After the passage of the current regulations, the Department continued to receive complaints that insurers engaged in steering consumers to specific automotive repair shops,” the agency wrote in its reasons for the regulation change. “From 2009 through present day, there have been over 160 complaints related to Ins. Code section 758.5. Based upon the Department’s investigation of these complaints, the Department concludes that in many cases, consumers’ rights to select a repair shop have been violated under the Ins. Code. When untruthful and deceptive information is conveyed by insurers, consumers are unknowingly forced to take their automobiles to shops they may not have wanted to go to in the first place, and other competitive automotive repair shops may lose potential business, stifling the free market and consumers’ rights to select a repair shop.”

The CAA concurs. It’s also issued a call to action for members to contact legislators, fearing insurers might seek a bill to end-run a regulatory effort dating back to 2012.

Four California shops have also sued major insurers alleging steering, though the U.S. district court case has since been closed pending the outcome of an Eleventh Circuit appeal.

The agency concluded that the regulations will affect insurers, but not really anybody else. (DRP shops will lose business to non-DRP shops, but the industry as a whole won’t lose business.)

“The Department anticipates that the proposed regulations will have multiple effects, including: 1) insurers will not communicate false or misleading information, 2) insurers will not steer claimants to specific repair shops, and 3) insurers will not require claimants to travel unreasonable distances or wait an unreasonable time to inspect or replace a vehicle,” the DOI wrote. “For instance, the Department anticipates that insurers will comply with section 2695.8(e), and will not steer claimants when suggesting or recommending a repair shop. This will create a more open market where claimants are not steered away from their chosen auto body repair shop by an insurer. The proposed regulations will likely have the effect of fewer complaints being filed by consumers and auto body repair shops based on steering.”

Despite the steering complaints, insurers argue “this practice is not widespread,” the DOI wrote.

The alleged steering can include untruthfully bashing the shop a Californian wants to patronize, according to the agency, which said it has received such complaints.

The DOI proposes making it clear that an insurer can’t disparage a shop without something concrete.

That includes bashing a shop just because it did or didn’t complete a labor rate survey.

Under the text of the proposed regulations, insurers couldn’t tell a policyholder that their choice of shop “has a record of poor service or poor repair quality, or of other similar allegations against the repair shop, without clear documentation in the claim file supporting these statements.”

They also couldn’t tell a customer that the selected collision repairer “has a record of poor service or poor repair quality, or of other similar allegations against the repair shop, solely on the basis of the shop’s participation or nonparticipation in a labor rate survey, without clear documentation in the claim file supporting these statements.”

If a customer succeeds in getting an insurer to accept their shop choice, the insurer allegedly might make things as inconvenient as possible, according to the DOI.

“The Department has received complaints from consumers that some insurers have advised them that it will take several extra days or even weeks for the insurer to inspect the damaged vehicle, unless the claimant goes to the insurer’s chosen Direct Repair Program (‘DRP’) shop,” the DOI wrote. “Insurers must have processes in place to inspect damaged vehicles in a timely and reasonable manner, no matter whether the claimant chooses his or her own repair shop or whether a DRP shop is chosen by the claimant. It is inherently unreasonable and unfair to delay inspection (and thus delay the repair) of vehicles because the claimant chooses a repair shop other than one suggested by the insurer.”

The agency also implies insurers have made customers take their car an “unreasonable” distance for an inspection even though the 2009 rules say not to do so.

To clear up any confusion as to “reasonable” — a word whose interpretation has enriched plenty of lawyers over the years — the DOI will spell it out, drawing from New York Regulation 216.7. The deadline is three or six days, depending on if the insurer relies on an estimate or wants to see the car in person, respectively. An insurer retains the right to do both.

So max, nine days — and you can’t tell a customer when attempting to push a DRP shop that the process will take longer than it actually will.

That still seems open for abuse. For example, an insurer tells customers it’d take the full nine days even if they have no intention of requesting both an estimate and a physical inspection. However, the DOI also noted “waiting longer than a week for an inspection would be unreasonable for a consumer in most cases,” so hopefully insurers will take the hint.

The current inspection time averages less than six days, so this shouldn’t be an unfair burden on insurers, according to the DOI. The agency considered giving insurers 10 days for a physical inspection, but concluded that New York has specified six days for decades, and the insurance industry hasn’t collapsed there.

Under the new language, the insurer also can’t be forced to take the vehicle to a shop the insurer wants for that appraisal.

How far is reasonable?

The insurer can still request the customer go somewhere other than the non-DRP shop, however, but the restrictions will specify just how far that that can be. The trip can’t be longer than 10 miles in urban areas with 100,000 or more people, and it can’t exceed 25 miles anywhere else.

“With regard to the mileage restriction, California is the most urban state with 95% of the population living in just 5.28% of the geographic area. Given the urban nature of nearly the entire state and the flexibility for the insurer to waive the inspection in lieu of an estimate by the claimant, the economic impact of this provision should also be very small,” the DOI wrote.

As noted before, the agency will take public comment and is open to suggestions about how to change the regulations to address what it feels is the problem.

For example, it wrote:

The public hearing will be held April 22 from 10 a.m. to no later than 2 p.m., at the first floor auditorium of the Employment Development Department, 722 Capitol Mall in Sacramento, Calif.