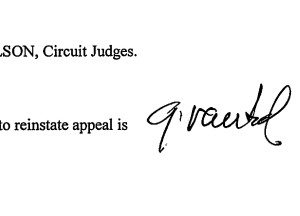 The shops filed a single consolidated appeals brief Feb. 9 asking the Eleventh Circuit Appeals Court to clear up what attorneys called the murky status of just how specific any federal lawsuit had to be. They also asked for the chance to offer an oral argument before the appeals court.

“This is an area of law which has experienced substantial confusion at the district court level and does not appear to have been fully addressed by this Court,” attorneys wrote. “As an issue of unsettled impression within this Circuit, Appellants believe oral argument would be helpful to resolution.”

But that brief, which was reinstated Tuesday, was filed 90 minutes after the 11:59 p.m. Feb. 8 deadline, according to the Jackson, Miss.-based Eaves Law Firm. The Eleventh Circuit threw out the case, effective Feb. 9.

Eaves attorney Allison Fry had asked the court Feb. 25 to restore the case, explaining that technical issues caused the filing process to take longer than anticipated.

Attorneys for State Farm, GEICO, Allstate, Progressive and other major national insurers sued by shops wrote in a response they wouldn’t take a position on the motion to reinstate the case. But “for the benefit of the Court,” they observed that the court’s website educates lawyers on the Java issue and how to compensate for the complications described by the firm.

Insurers have 30 days to respond to the appeal.

The appeal accuses Middle District of Florida Judge Gregory Presnell of overly relying on the arguments of the defendant insurers, which include the largest auto underwriters in the country and giving short shrift to the plaintiffs. They also disparaged his application of Virginia, Kentucky, New Jersey and Missouri state law.

“The district court erred repeatedly in failing to abide by the required standard of pleading,” the brief states. “It consistently adopted Appellees’ arguments contrary to the factual allegations of the complaint, disregarded facts and otherwise failed to cloak the complaints with the acceptance of truth provided by in law on a motion to dismiss. The district court repeatedly amended, altered and otherwise failed to faithfully apply the law of the states. Had the proper analyses been conducted, the dismissals would not have been granted.”

The shops argue that taken together, identical ceilings on labor rates and restrictions on what procedures will be reimbursed indicate collusion.

“In the absence of an agreement, there should be variability. At least some of the Appellees should find a pinch weld necessary following a frame repair every now and again, for instance. No two vehicles wreck the same. Every wreck is different,” the appeal states. “The estimates written by the Appellees, however, are astonishingly uniform. Given the individuality of each repair, the district court should have given the uniformity of estimates prepared by the Appellees some consideration in analyzing context. However, based upon the ruling, the district court gave this no consideration at all.”

There seems to be a disconnect, as Presnell’s dismissal in these lawsuits drew from his rejection of the flagship Florida case A&E v. 21st Century.

“The Defendants are not alleged to have acted uniformly, such as by only agreeing to pay the same fraction of the estimate provided by a database,” Presnell wrote in January. “Accepting the Plaintiffs’ allegations as true, the Defendants are simply refusing to be bound by third-party estimates that they are not legally obligated to follow. If this constitutes parallelism, it is an extremely minimal version.” (Emphasis added.)

State Farm’s labor rate surveys are not made public, and so the No. 1 auto insurer must be sharing that information with the competitors who refuse to pay more, the appeal alleges.

But Presnell felt that parallel behavior doesn’t mean a conspiracy, and there was nothing wrong with competitors refusing to pay more than a rival.

To their point of Presnell setting the burden of proof too high for a case to merely survive a motion to dismiss and move forward to pre-trial stages like discovery, the shops cited Swanson v. Citibank, which interpreted the Supreme Court’s pleading standard in 2010.

“As we understand it, the Court is saying instead that the plaintiff must give enough details about the subject-matter of the case to present a story that holds together,” the Seventh Circuit wrote then. “In other words, the court will ask itself could these things have happened, not did they happen. For cases governed only by Rule 8, it is not necessary to stack up inferences side by side and allow the case to go forward only if the plaintiff’s inferences seem more compelling than the opposing inferences.” (Emphasis court’s.)

The shops also point out the “irresolvable conflict” in Presnell’s requesting each defendant be paired by name with the specific accusations against it — rather than simply writing “the Defendants” on allegations applicable to all insurers — but then objecting in the A&E v. 21st Century ruling when the shops listed every single insurer.  (Eaves Law Firm plans to appeal that Florida case to the Eleventh Circuit as well.)

“With respect to group pleading in general, this (Eleventh Circuit Appeals) Court has repeatedly and consistently held that where a plaintiff asserts a group of defendants engaged in the same conduct, referring to that group as ‘the Defendants’ is permissible,” the shops wrote to the Eleventh Circuit.

“… In a separate action in this MDL, the district court ordered the plaintiffs therein to amend the complaint so as to particularly identify each defendant in relation to the facts and causes of action asserted. After plaintiffs did so, the court expressed its extreme dissatisfaction, complaining that listing each and every defendant for each and every factual allegation and cause of action made the complaint unnecessarily long and threatened plaintiffs with sanctions if it was done again.

“This district court has, therefore, foreclosed all avenues of pleading. The court has precluded use of “the Defendants” as well as banned particularized identification of each defendant under threat of sanctions.

Correction: An earlier version of this article misstated the number of shops involved in the appeal. Eight shops are involved. The article has since been updated.