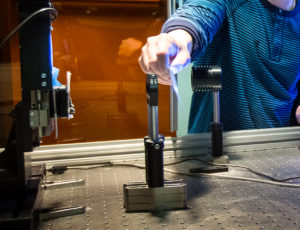 Oak Ridge wrote in a May 19 news release that the laser process could “replace the practice of preparing the surface of the materials by hand using abrasive pads, grit blasting and environmentally harmful solvent.” Aluminum surfaces often are covered by oils and other production rolling byproducts, and mold releases usually appear on carbon fiber-reinforced polymer composites.

That seems as though it’d be a godsend for the aftermarket as well as an OEM, though it’s likely only a factory-only application. We’ve asked Oak Ridge for more details.

An automaker could use the laser to strip away layers of unwanted matter from surfaces, according to Oak Ridge, which wrote the technique “provides a path toward automation for high-volume use” — i.e., mass-production at an auto plant.

If it does make it out of a lab and into factories, it could hasten the introduction of carbon fiber, which experts from Puegot and NanoSteel have both called automotive’s future. That could in turn hasten the day in which the majority of collision repairers must adapt to the material in bodies-in-white and panels. (Based on the i3, think more parts replacement and gluing, at least according to BMW Blog.)

“Our technique is vastly superior to the conventional surface preparation methods,” research leader Adrian Sabau said in a statement. “Combined with the potentially dramatic reduction in the cost of carbon fiber polymer composites, this represents an important step toward increasing the use of this lightweight high-strength material in automobiles, which could reduce the weight of cars and trucks by 750 pounds.”

“The results are most encouraging, enabling the automated processing of a multi-material carbon fiber-aluminum joint,” Magna government partnerships staffer Tim Skszek (who knows metallurgy and lightweighting) said in a statement. “With this work, we were able to focus on addressing the gaps in technology and commercial use, and we look forward to applying these findings to products.”

On top of blasting away the oils and mold releases, Sabau said the laser also removes part of the top layer of resin surrounding the carbon fibers. Not only can the adhesive bond right to the fibers, but it receives a slightly larger surface area to work with.

Oak Ridge wrote that laser-prepared joints can take about 200 percent more energy than those prepared with the abrasive, grit and solvent. Sabau felt that carried “implications for crash safety and potential use in armor for people and vehicles,” according to Oak Ridge.