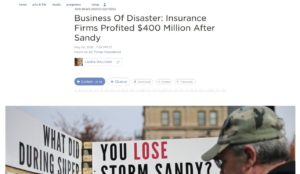 A PBS Frontline and NPR “Business of Disaster” series making waves this week alleges insurance companies underpaid Superstorm Sandy claims they were handling on behalf of the feds.

The NPR report takes insurers to task for making an average 29 percent profit margin on fees charged the government to administer the FEMA-run program.

“In theory, homeowners shouldn’t be shortchanged because the insurance companies are only acting as a middleman between FEMA and the homeowners making claims, essentially contracting with the government to evaluate damage and assess compensation,” NPR wrote.

The NPR piece features an adjustor who says companies clamped way down after Katrina and adjuster’s reviewer Jeff Coolidge, who “says he quit his job because he was so bothered by what he was doing”:

The insurance firms he worked for used phrases like “pre-existing,” “earth movement” or “ground settlement” to reject homeowners’ claims of flood damage. “They use ‘settlement’ a lot. ‘Sorry your house looks like it shifted to the left a little bit, but I think it was like that when you bought it,’ ” Coolidge said.

They told him to pay homeowners less than what they asked to be paid to rebuild, he said. He says that put pressure on him to get the independent adjusters in the field in line to back up these conclusions, or else their flat fee was at stake.

“I’ve told an adjuster that based on our guidelines that I need you to remove these items,” he says. “I send it back for revision. He doesn’t agree with that. He’ll resubmit it. I’ll reject it back.”

If the adjuster wanted to pay the homeowner more, Coolidge would reject the adjuster’s assessment until he got the answer his employer wanted, and in some cases he switched adjusters or threatened to do so. “‘I’m going to take half your pay and give it to him,” he recalls telling several adjusters.

Looking back, Coolidge says he regrets that behavior but at the time, he didn’t feel he had a choice. “I feel bad every day for participating in that. It is what it is. [The insurance companies] had the upper hand. You either do it or they’ll remove you.”

FEMA has reopened Sandy claims review, drawing thousands to seek it, and so far it found more than 80 percent were underpaid, according to NPR.

NPR faults the government for too little oversight of the program, though it notes that FEMA also might have sought a better flood claims crackdown “when some companies charged unrelated damage coverage to the flood program instead of their own wind coverage.” (Ironically, apparently not homeowners abusing the system — because of other bad insurance behavior.)

NPR provides a couple of other theories, besides being too zealous saving tax dollars, to explain why the insurers would be overly stingy when the money isn’t theirs:

See the entire hour-long Frontline video for free here. You can also watch it by paying (Starts at $1.99) on the PBS YouTube channel.

The Insurance Information Institute provides a counterpoint in the report, and the Property Casualty Insurers Association of America released a statement Wednesday:

“Insurers are committed to assisting policyholders in need, quickly and efficiently. This is not about profits or process. It’s about protecting families and communities,” PCI policy development and research Senior Vice President Robert Gordon said.

“The industry has a strong track record of settling claims quickly and with few errors. However, lessons have been learned and insurers want to be part of the solution to improve the system. PCI is working with Congress to make improvements to the flood insurance system and the customer experience, including discussions of greater private sector involvement. An evolving flood marketplace with private and public providers offering more choices could help get families and businesses back on their feet sooner after a disaster.” …

“(Write Your Own) companies have no incentive to underpay policyholders. WYO insurers are required to strictly follow the terms of FEMA’s policy contracts. WYOs do not underwrite risk or make underwriting profits – they only act as an agent for the federal taxpayers and are subject to strict penalties if they fail to follow FEMA’s settlement guidelines.”

While the insurers appear to have been needlessly cheap, the NPR piece does seem to have too much of a “big business profit = bad” vibe and not assign enough blame to the government’s responsibility for the program oversight and whatever payment or claims handling directives insurers were or weren’t given.

Still, the exposure of this kind of claims behavior — whether prompted by habit, keeping the program solvent, or because of a federal command to save money after insurers‘ post-Katrina practices — maybe will prompt customers, shops, insurers, officials and non-trade media to take a closer look at what shops have alleged are overly stingy, “pre-loss”-obligation-ignoring auto insurance practices.

Or we’ll get some more auto insurance whistleblowing adjustors like the homeowner’s ones the project interviewed– those usually make for interesting stories.

“Insurers are Committed to Assisting Policyholders in Need, Quickly and Efficiently”

Featured image: A PBS Frontline and NPR “Business of Disaster” series making waves this week alleges insurance companies underpaid Superstorm Sandy claims they were handling on behalf of the feds. Here’s a screenshot from one of NPR’s stories. (Screenshot of www.npr.org)