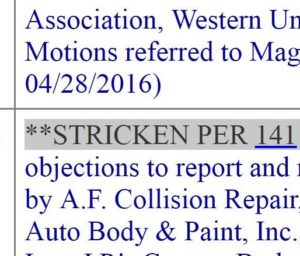 With evident frustration, an attorney for dozens of shops and two state associations who’ve sued insurers criticized Wednesday a Florida judge’s handling of the related litigation.

“We have just not received any kind of fair treatment from the court in Florida,” Allison Fry of Jackson, Miss.-based Eaves Law Firm said.

Florida Middle District Judge Gregory Presnell, who is hearing more than 20 similar cases filed across the country, has repeatedly ruled against the shops.

Magistrate Judge Thomas Smith, assigned to make recommendations on the case, has also taken a skeptical eye to the litigation — and on Friday, Presnell rejected one of Smith’s few decisions in favor of shops to kill the remainder of a Mississippi case.

Fry, one of several attorneys working on the litigation, wasn’t aware of Presnell’s Friday order in Capitol Body Shop et al v. State Farm et al and said she couldn’t comment until having seen it.

However, she said the Middle District of Florida had shown it intended to dismiss virtually all of the multi-district litigation before it. Shops’ hopes lay with appeals to the Eleventh Circuit over the degree of scrutiny necessary at the opening “pleading” stage of a lawsuit — a question the shops’ attorneys have argued has created confusion at the district court level nationally.

In fact, a district judge in a Tennessee collision repairer’s case once considered for transfer to Presnell’s court has ruled much along the lines argued by Eaves Law Firm. The case has since been dropped, and the shop and defendant Progressive will pay  their own fees.

Smith also last month upheld insurers’ motions to strike Louisiana and Utah shops’ objections to his recommendations and struck their separate response to GEICO in the Utah action. He ruled that not only had the objections blown their deadlines, but they were pages and pages too long.

The shops never countered GEICO’s request to strike their reply to the insurer at all, according to Smith.

With the shops’ counterarguments in Utah and Louisiana cast from the record, it seems unlikely that Presnell will deviate from all of Smith’s recommendations to kill most of Parker Auto Body et al v. State Farm et al and Alpine Collision Center et al v. State Farm et al with prejudice. And with no further filings responding to insurers’ opposition to retaining the few pieces of the cases — a few tortious interference “steering” allegations Smith merely suggested dismissing without prejudice, both Utah and Lousiana cases could face the same fate as the Mississippi action.

Fry on Wednesday chalked up the delay to difficulties in the electronic case files (ECF) system, something the firm experienced with its initial Eleventh Circuit brief.

“We have had an extensive problem with logging into the ECF system,” Fry said. “… (It) simply doesn’t like me.”

She said she had left a message for Smith with no avail.

As for the absence of motions for more time or more pages for the objections — two items noted by Smith — Fry said attempting them would have led to blowing the deadline for submitting the actual filing.

Filing such a request requires conferring with a defendants’ representative, who must then transmit that information to all the different insurers’ counsel to see if anyone has an objection also requiring a response.

“Historically, they do not timely replay,” she said. “But I am required to make the effort.”

Meanwhile, the shot clock still runs on the deadline to file the actual objection to the court — which must address every point Smith raised in recommending against the case continuing. “(The court) rules when it rules,” she said.