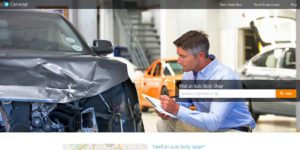 A 2013 Dimensional Research-ZenDesk survey found 88 percent of customers in 2013 reported that positive and negative online reviews impacted their buying decisions. Though the promotion offered by potentially competing direct repair programs and OEM collision repair networks seemingly dominates the collision repair marketing landscape, the impact of such feedback can’t be ignored. (Interestingly, customers didn’t gravitate as much towards only reading and leaving bad reviews as one might expect, based on the survey. Good for you, Internet.)

CCC on Monday elaborated on its methodology for Carwise — which describes 1.3 million reviews on its homepage. A spokeswoman described a model which avoids some of the flaws and controversy of well-known sites like Yelp and Google Reviews but might raise other issues. (There’s probably no true “right way” to do a review site, of course.)

As mentioned above, CCC posts the customer service feedback provided at the end of collision repairs. Not only does this provide a rich supply of data — think about how fallow other review sites can be as they sit hoping for customers to take the initiative and post something — but it circumvents the “Did a real customer write this?” question businesses and users have with other sites.

“Our approach with Carwise has been to create a platform that helps our repair customers connect, inform and engage with consumers so they can capture more business and showcase their great work,” CCC market solutions Vice President Mark Fincher said in a statement. “We’re excited to reach this milestone and because so many of our repair customers are seeing value in it, we expect adoption to continue to grow at an accelerated rate.”

Spokeswoman Michelle Hellyar wrote in an email that CCC can send one or two different CSI surveys to customers, depending on which UpdatePlus they use.

“The first that is available for UpdatePlus Status customers asks one question on the day of delivery: ‘Were you completely satisfied with your repair?’ (Yes/No),” Hellyar wrote. “The second survey is available for UpdatePlus CSI customers and is a seven-question CSI survey. Once the single question survey is responded to that review is posted to Carwise. Once the CSI survey is completed the results along with any customer comments are posted to Carwise. If both the surveys are completed for the same repair, we merge the two surveys so all responses/data are shown.”

Aside from this merging and a conversion of a 1-10 scale put to customers to the 0-5 scale used on Carwise, CCC doesn’t alter the reviews or pass judgment on their merit. (Unlike Yelp, for example, which has “Recommended Reviews” and “not currently recommended” reviews.)

“Reviews are never editorialized,” she wrote. “Consumer reviews are posted as received. That said, we do have an algorithm built-in to check for abusive language and if we find a pattern, the system automatically hides the ‘comments’ of the review.”

Carwise also lets shops post their CCC reviews on their own website and includes shop listings to find a shop.

“Repair services aren’t something people buy every day,” Mike Schoonover, owner of Shoreview, Minn.-based Schoonover Bodyworks & Glass, said in a statement. “Customer reviews are an important tool to help consumers make better decisions about who they want to trust with their vehicle. After trying other review sites, we chose the Carwise solution. Because reviews are captured as part of the post-repair customer satisfaction survey, I know that only real customers are providing feedback on my services. Carwise also integrates seamlessly with the CCC ONE platform, making it extremely reliable and easy to use.”

Ironically, the right-from-the-horse’s-mouth nature of the site can backfire; a look at Schoonover’s reviews indicate that while predominantly positive, at least a couple of customers have complained about being pestered to take the survey.

The reviews rate shops on six qualities: “Customer Service,” “Likely to Recommend,” “Repair Quality,” and “Returned Clean” with a 0-5 scale and”Kept me Informed?” and “Ready on Time?” with yes/no questions.

“The scores are not weighted,” Hellyar wrote. “The overall star rating is based on the response to the Would Recommend question (On as scale of 1-10 how likely would you be to recommend XYZ Collision to friends and family). CCC converts the survey response from a scale of 1-10 to a 5 star scale for each question (i.e. a response of “9” would be converted to 4 ½ stars).”

So it’s sort of weighted, and it sort of isn’t.

Though marketed to shoppers as a way to find a body shop, only CCC customers appear — leaving a large chunk of the industry MIA to laymen who likely have no idea what CCC even is. Carwise references 17,000-18,000 shops; there’s 30,000-odd collision repairers in the country.

“All CCC ONE customers are listed with a business profile on Carwise.com,” Hellyar wrote. “For those customers that subscribe to CCC ONE UpdatePlus reviews can be shared online.”

Carwise hints at this but doesn’t fully explain on its customer FAQs:

Why can’t I see the shop right around the corner from me?

The Carwise network contains about 17,000 auto body shops nationwide. We are adding more and more shops to our network every day. 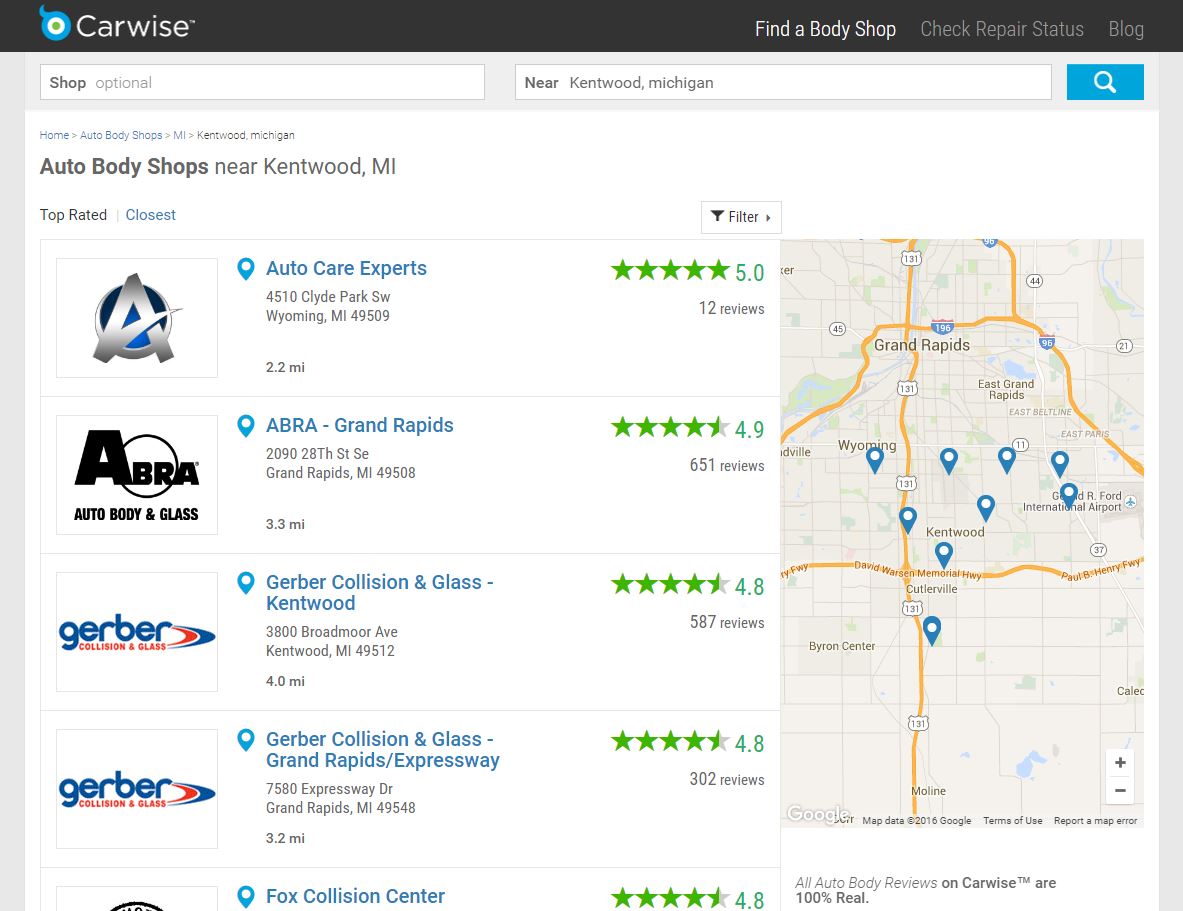 Shops can’t reply to customers, something which has yielded positive results on Yelp (as well as led to at least one shop putting their foot in their mouth).

“Not at this time, but we are considering this functionality as a future enhancement,” Hellyar wrote.

An example of a review from Carwise. (Screenshot from www.carwise.com)

A map of shops near Repairer Driven News’ office is shown on Carwise. (Screenshot from www.carwise.com)