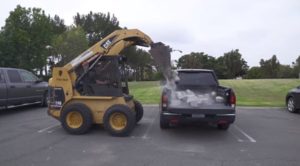 Not only can the Honda Ridgeline’s bed shrug off the infamous landcaping blocks test, it can play the soundtrack from “Rocky” afterwards.

However, its “entire bed is a speaker” concept and the durable bed itself shouldn’t prove overly difficult for collision repairers to manage, according to Honda.

On Friday, the manufacturer showed off the durability of its composite bed — in this case, fiberglass and resin versus carbon fiber and resin — when subjected to hundreds of pounds of landscaping blocks.

In footage posted Friday to YouTube, Honda mimicked Chevrolet’s dumping of hundreds of pounds of landscaping blocks on a 2016 Silverado and 2016 Ford F-150.

The Detroit Bureau on Monday cited Honda officials as saying the OEM shot the footage months ago, though Honda video host Brad Nelson appears to reference the Ford-Chevy item in the opening seconds.

In Monday’s video, Honda repeatedly drops what Nelson, assistant manager of Honda technical PR, described as “over 800″ pounds of blocks on the black Ridgeline composite bed.

Honda’s YouTube description indicates 60 landscaping rocks at between 14-16 pounds (840-960 pounds total, based on Honda’s estimates.) The Detroit Bureau reported that Honda’s already dumped 1,500 pounds of rock on the bed at some point.

“So you can see, there’s virtually no damage to the bed,” Nelson’s voice-over states. “There are some scratches, which you can really barely see because the composite bed hides them so well. It’s black all the way through the thickness of the material.”

Read about an older generation of the fiberglass composite bed in this 2005 Automotive News coverage.

The other slick feature of Honda’s bed involves its ability to play music through the truck box through “six exciters located inside the bed walls, in place of conventional speakers, pumping out sound from the Ridgeline’s audio head unit, with up to 540 watts of power,” according to Honda.

The exciters mimic the magnet-and-cone nature of a traditional speaker through their attachment to the inner bed panels. A June Honda Body Repair News highlights sheet states they’re offered on the RTL-E and Black Edition trims.

Car and Driver said that while “sound quality is a little low-fi, and bass is nonexistent … it’s a good means of reproducing country music” — not to mention being waterproof and impact resistant. The Detroit Free Press called the audio “surprisingly good.”

Adding the caveat that while of course “we’d rather have our dealers do it,” Adams said the exciters could be managed by a body shop easily.

They’re bolted to the panel, and “anybody who can wire speakers up can wire the bed exciters as well,” he said. 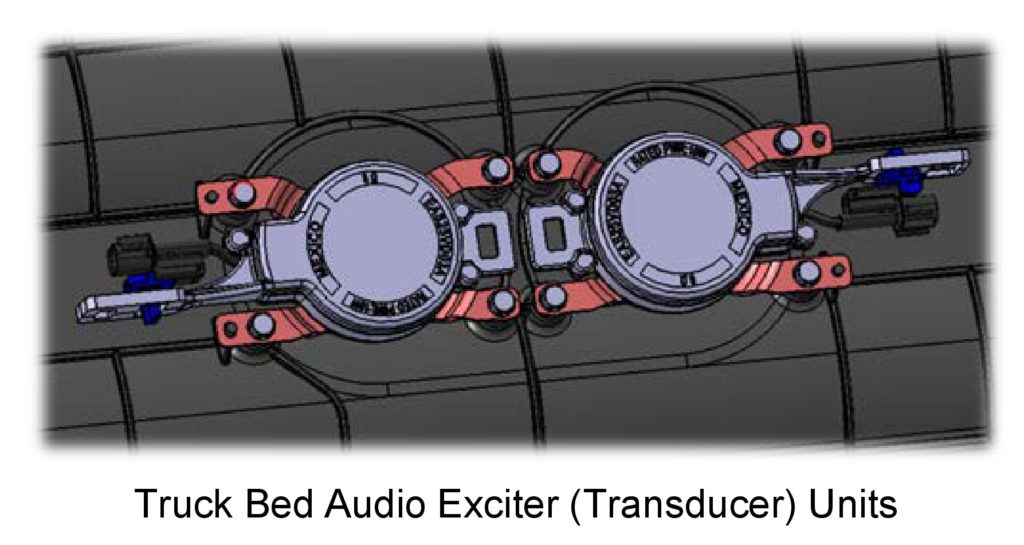 However, a shop might not have to bother. “It would take a pretty significant impact” to damage the audio system, particularly since they’re not on the exterior panel, Adams said.

Other items which ought to be convenient for repairers on the bed (and don’t forget that the truck is still a unibody):

The quarter panel used to be “one giant sail,” Adams said, but now, there’s a break between it and the C-pillar panel.

The fenders are bolted to the body for a “traditional pickup truck appearance while allowing easier removal and replacement in case of outer bed panel damage,” the Body Repair News states.

The bed and inner panels are all extremely modular.

“If damaged, all bed components can be disassembled from the body & individually replaced,” the Body Repair News states.

The bed and inner panels on a 2017 Honda Ridgeline are all extremely modular, a June 2016 Honda Body Repair News states. (Provided by Honda)

A diagram of exciters on the 2017 Honda Ridgeline is shown in this June 2016 Honda Body Repair News. (Provided by Honda)