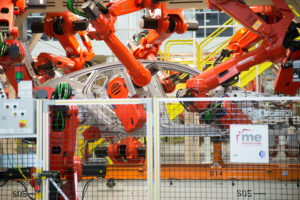 While the goalpost might be moved a little closer for OEMs than 54.5 mpg, a federal assessment of the CAFE standard announced last week indicates collision repairers won’t see much dropoff in the adoption of advanced auto body materials through 2025.

So keep boning up on ultra-high-strength steel, aluminum — and possibly carbon fiber and magnesium. The government’s midterm review of the 2012 rule — developed in conjunction with California’s Air Resources Board — has set an effective target of a 50.8 mpg fleet average in 2025. That estimate could swing to 50 mpg if gas stays cheap and to 52.6 mpg if gas gets expensive again.

Basically, Americans bought more trucks than anticipated, probably because of cheaper gas. That brings down the odds that the entire fleet will behave like the original fleet considered, which had a larger sedan market share, according to the feds.

On the other hand, OEMs actually have innovated more quickly for gas mileage than the government thought, increasing those odds. In fact, the Environmental Protection Agency, Department of Transportation and CARB noted last week that automakers “overcomplied with the standards for each of the first three years of the program, and in 2014 outperformed the standards by 1.4 miles per gallon.”

“Today’s draft report shows that automakers are developing far more technologies to improve fuel economy and reduce greenhouse gas emissions, at similar or lower costs, than we thought possible just a few years ago.  And they are adopting these fuel-saving technologies into their fleets even faster than anticipated,” EPA Office of Air and Radiation acting Assistant Administrator Janet McCabe said in a statement. “This is simply great news for consumers, manufacturers, workers and the climate.”

CARB participated to prevent the chance that the environmentally friendly California, a gigantic automotive market, would deliver tougher regulations than the feds and force companies to produce two types of cars.

“After almost four years of close collaboration on the draft Technical Assessment Report with our federal partners, the conclusions are clear: costs are lower for many technologies than we originally thought, market uptake is strong, and expected consumer benefits remain high,” CARB Chairwoman Mary Nichols said in a statement.

There’s no actual across-the-board target; each OEM will be judged based on if its specific production of vehicles meet federal car and truck targets.

“A manufacturer’s compliance obligation depends on the mix of vehicles that it produces for sale in each model year – if a manufacturer produces mostly larger vehicles, its average standard will be less stringent than if it produces mostly smaller vehicles, reflecting the reality that smaller vehicles often have better fuel economy and lower carbon emissions than larger vehicles,” the EPA explained. “This approach ensures that consumers can continue to choose from the full range of fuel efficient vehicles on the market, and at the same time, it improves efficiency and emissions for all types of vehicles.”

The agencies’ real end goal is to reduce carbon dioxide emissions and mitigate the impacts of global warming. The true target anticipated in 2012 had been 163 grams of CO2 per mile driven. Doing so with a fleet of 67 percent cars and 33 percent trucks meant a CAFE mandate average of 48.7 mpg — for which automakers would have to produce a gas-and-alternative-fuels fleet averaging 54.5 mpg.

Based on sales, technology and federal energy outlook data, the agencies anticipate that a mix of 52 percent cars and 48 percent trucks would produce 175 g/mi in CO2 for a CAFE average standard for 46.3 mpg. OEMs would have to overall produce an average of 50.8 mpg in fleets using gas and electrification.

Adjust it for more cars or more trucks using other models anticipating low or high gas prices, and you get a new magic number ranging from 50 to 52.6.

“Automakers have already implemented new technologies that are saving American drivers money and cut national fuel consumption and carbon emissions today,” NHTSA Administrator Mark Rosekind said in a statement. “The draft report supports that the administration’s fuel economy program can continue to incentivize innovation and reduce fuel consumption while also ensuring that consumers can continue to choose the vehicles they want to drive.  The agencies welcome public comments to assist the agencies’ analysis and decision making.”

Besides lightweighting, OEMs have also used turbocharging, more advanced transmissions, smaller engines (lower weight helps pull that one off), aerodynamics and stop-start to reduce emissions. Better air conditioning and “accessories” have also helped, according to the feds.

“There are over 100 car, SUV, and pick-up truck versions on the market today that already meet 2020 or later standards, suggesting that automakers should be well-positioned to meet future average standards through additional application of those technologies,” the EPA stated.

No final decision has been made. The agencies will hear public comment for 60 days. Find out how to give your input here.

A more formal proposal will follow, and the ultimate decision must come by April 2018.

Besides being swayed towards stricter or looser gas mileages by the public comments, there’s also the possibility that the agencies’ plans could change with the election of a new president. The new president will take office in 2017.

However, the influence of California as well as an OEM interest in consolidating manufacturing around global platforms (i.e. European emissions rules) would seem to indicate that tougher standards would effectively remain regardless of even if the new president’s administration directs the agency differently than President Obama’s has.

IHS Automotive Managing Director Michael Robinet made this global convergence point in a June Auto Care Association lightweighting webinar. He appeared to have been using an older version of this September NEDC-adjusted chart from the International Council on Clean Transportation: Here is the data adjusted for CAFE mpg standards. (Remember, this is in September 2015, prior to the new proposed regulations.) While the goalpost might be moved a little closer for OEMs than 54.5 mpg, a federal assessment of the CAFE standard announced last week indicates collision repairers won’t see much dropoff in the adoption of advanced auto body materials through 2025. (Provided by Environmental Protection Agency)

September 2015 NEDC-adjusted chart from the International Council on Clean Transportation. (Provided by ICCT)