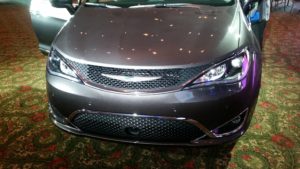 Besides advanced materials like an aluminum-magnesium rear liftgate and higher-strength steels, body shops need to be aware of the kind of sensors and cameras that can be located all over the 2017 Chrysler Pacifica minivan exterior and mirrors.

A Limited version of the minivan — previously known as the Town and Country — sat parked on the floor of a major OEM automotive summit this week in Traverse City, Mich. FCA minivan and large car Vehicle Line Executive Mike Downey was nice enough to indulge us with a sensor/camera tour around the vehicle, the top of the Chrysler Pacifica trims.

Here’s a look at what some of the gadgets do. (Of course, you’re going to want to still check the repair procedures for the Pacifica in front of you.) We’d argue that their existence makes it harder, if not impossible (the mirrors) for insurers and repairers to justify or try some really common aftermarket imitation parts.

That’d be a risk both for safety reasons and because the customer is going to know quickly if something’s not fitting perfectly — or missing.

The camera on the left side of the center of the rearview mirror is related to advanced driver assistance systems like autobraking and adaptive cruise control. The little gizmo on the right is used for a rain-sensing windshield wiper.

United Kingdom auto glass and body shop companies have observed that such cameras mounted on the mirror mean recalibration must be done after any glass replacement. Assuming OEMs continue to put autobraking cameras in the mirror or behind the windshield as AEB becomes standard by 2022, that requirement’s not going to change. The little camera on each side-view mirror relates to the 360-degree surround view feature, which knits four camera angles together. The triangle is the an alert tied to the blind-spot monitoring system, which is managed by a sensor on the body-in-white that (obviously) isn’t visible here.

The entire blind-spot monitoring system is also used for the parallel-parking assist feature of the vehicle.

The little image closer to the car is an indicator of the mirror-defrosting system. The Chrysler logo mounted on the top grille of the minivan sits atop a tiny camera, which is part of the vehicle’s 360 surround view. The larger bubble on the bottom grille contains the other camera used in the same ADAS systems as the rearview mirror camera. Remember, autobraking is in this one, as is automatic cruise control. You absolutely don’t want to compromise those. The front and rear bumper covers have six structures — four on the front and one on each side — that sort of look like unpopped turkey timers. They relate to sensors tied to the parking assist system — which alerts drivers with louder and louder beeps before the minivan gives up and brakes for the oblivious owner.

Like the other systems, this isn’t something to screw up, as your customer could not only damage their own vehicle but also someone else’s. Plus, the minivan owner’s going to know really quick that the system stopped working and figure out you didn’t fix it right the first time.

The company invented the minivan in 1984, and it has since sold 3.5 million of them, Downey said during the day’s sessions. The Pacifica starts at just $28,595 MSRP, plus $995 destination. The Limited model sells for $42,495 MSRP, plus $995 destination. But for $34,495, it appears that the Touring-L model would have all of the same safety systems (whether or not in the same locations is unclear from FCA promotional photos). But given the target audience — people with kids to protect and a need for convenience — it seems likely that buyers would pay the extra $6,000 for the at least the Touring-L package of safety (and internal convenience) bells and whistles.

Chrysler has so far sold 10,189 Pacificas since the minivan went on sale in April. Last year, it sold 93,848 of the predecessor Town and Country minivan.

Featured images: Besides advanced materials like an aluminum-magnesium rear liftgate and higher-strength steels, body shops need to be aware of the kind of sensors and cameras that can be located all over the 2017 Chrysler Pacifica minivan exterior and mirrors. (John Huetter/Repairer Driven News)