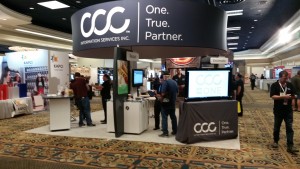 The widely used CCC has updated its MOTOR estimating guide with a nod to the recent burst of OEMs stressing pre- and post-repair scans.

The August 2016 revision also contains new passages on aluminum — likely coming to all kinds of panels and hoods/trunk lids — welding and refinishing. Find them here by looking for the blue text and chapter stars.

The guide had already placed “Scan tool diagnostics” and “Scan tool clear / reset electronic module” (part of a post-repair scan) on its list of non-included operations. But the August 2016 revision of the guide, which can be accessed here, elaborates further in the “Labor Time Premise” introduction.

“Many OEMs recommend a pre- and post-repair diagnostic scan on all vehicles involved in a collision that could reveal pre-accident or accident-related damage,” CCC wrote. “Please refer to OEM position statement and repair procedures for more information.”

Scans aren’t actually as new as it seems. For example, a 2013 SCRS Education Committee presentation by Toby Chess pointed out the kind of technology demanding the procedures three years ago.

The Special Substrate Metals section already had pointed out that aluminum is heat- and corrosion-sensitive. But it now refers users to OEM repair procedures and stresses the variety of automotive aluminum in existence.

“Variances can be found in alloy, strength, temper, and gauge properties,” CCC wrote. “Such variations need to be considered prior to attempting a repair, and an on-the-spot evaluation is required. Aluminum component repair and/or replacement often requires specific equipment and tools. Always consult OEM repair procedures for vehicle-specific information.”

Welding equipment is changing and evolving along with body-in-white materials like aluminum and higher-strength steels. Perhaps because of this, CCC notes that welding times don’t include welder setup and other preparation before the actual work. (For another Chess offering, check out his welder specification spreadsheet.)

“Due to the different types of welding equipment used in the collision repair industry, labor times for welded replaced parts do not include equipment manufacturer procedural steps for welder setup and/or welding tests and preparation,” CCC wrote. “Each welding machine manufacturer may have its own unique configurations and setup processes. Additionally, there may be vehicle-specific variables that may increase or decrease the amount of welding machine set-up time and pre-weld preparation. MOTOR suggests using an on-the-spot evaluation to determine an appropriate set-up and preparation time.”

The Database Enhancement Gateway has taken quite a few inquiries related to raw bumper prep on estimates. In fact, CCC added an 0.7-hour prep option for a 2010 Mazda CX-9 to its software following an inquiry in January.

With the latest estimating guide revision, CCC stated that it will add an unprimed bumper prep operation whenever OEMs say it’s necessary. But just because the OEM didn’t say one way or another doesn’t prove the bumper is or isn’t primed, according to CCC. A technician might still need to prime it and include that operation on the estimate.

Finally, CCC made it clear that prime and block is indeed a refinishing operation. The refinishing section of the MOTOR Guide to Estimating already had implied this, but now it’s conclusive.

A May “Who Pays for What?” report (available to shops for free) found more than half of the hundreds of shops which responded to additional feather, prime and block questions received body labor for feather, prime and block, even though just 19 percent solely used body technicians for the work, the survey found. Another 10.6 percent used techs which perform both body and paint work.

Technically, a body technician could perform all three elements of the feather, prime and block process — but they might need to be certified under the Environmental Protection Agency’s Rule 6H requirement. If they’re not, then a shop might be out of compliance on the priming and make the feds mad, according to Collision Advice President Mike Anderson. 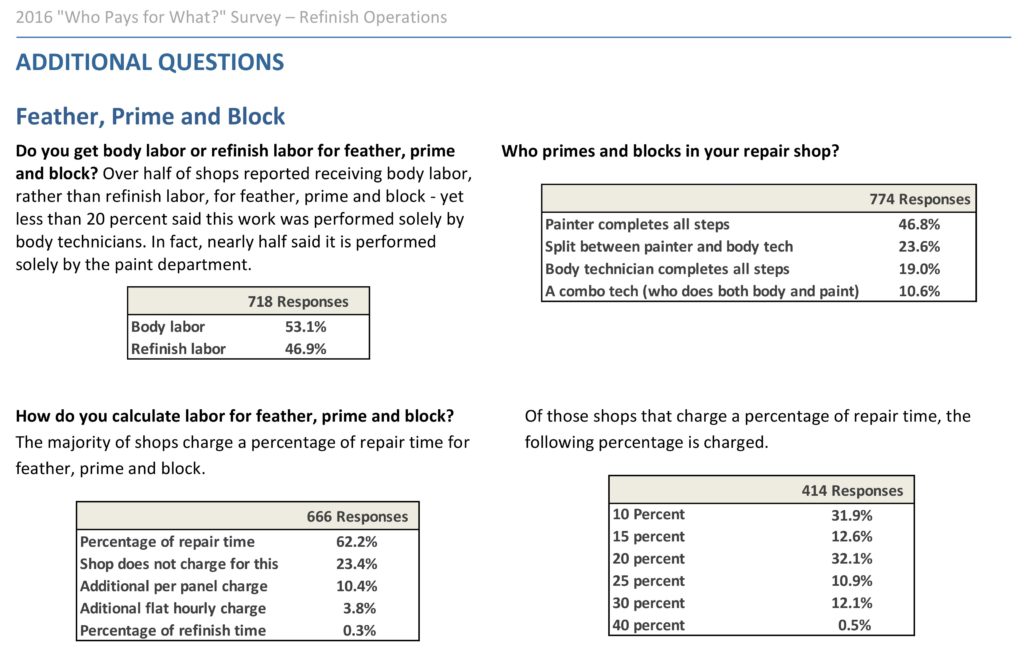 For an interesting point-counterpoint on how the “feather, prime and block” labor and materials should be calculated, see our June coverage of Anderson and P&L Consulting’s Larry Montanez’s views.

Even when a shop asks and the insurer pays for feather, prime and block, it might involve the wrong labor rate for the wrong technician, the 2016 refinish “Who Pays for What?” survey found. (Provided by Collision Advice-CRASH Network)