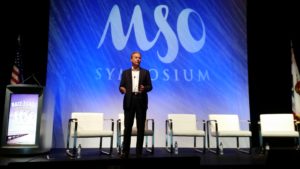 Though 2016 has been “pretty slow” in terms of collision repair M&A, a fifth consolidator could surface within the next 12-18 months, market researcher Vincent Romans predicted Thursday.

That new player could come from overseas or be another U.S. private equity entry, the Romans Group founder told the MSO Symposium at NACE in Anaheim, Calif.

Overall, “things could be slowing down,” Romans said.

Another analyst, Supplement Principal Brad Mewes, agreed the prior day that Service King and ABRA “effectively left the market” in the second quarter of 2016, raising the question of whether it was a blip or indicative of a trend.

However, Mewes repeated his theory Wednesday that one of the Big 4 would buy an MSO competitor within the next two years.

Romans said he wasn’t sure what to make of the slowed consolidation in 2016, but fears that the industry would shrivel didn’t seem to be founded. Like Mewes, Romans noted that “ABRA has taken a breather” after what had been “two aggressive years.”

“We’ll see what they eventually do,” Romans said.

In terms of states, Illinois is red-hot in terms of acquisition activity, followed by California, Romans said. Rick Wood, CEO of Cooks Collision, said during a regional-MSO panel at the symposium that he agreed with Romans. A fifth organization, or even a sixth, could enter the large national MSO space, he said. However, he also allowed for the possibility of a combination within existing large MSOs.

Dealerships were a wild card, he said, and LaMettry’s Collision President of Operations Darrell Amberson noted that the dealership body shop model becomes more attractive with the rise of OEM certification and technology considerations like scanning and calibration. Romans estimated the collision repair market at $39 billion in 2015, $34 billion for what we’d typically consider the core “sweet spot” of the auto body industry. In 2014, this was $32.5 billion.

Consolidators had “almost 30 percent of the market” in 2015, Romans said. However, they comprised “a very small amount” in terms of locations, he said.

There were still “a lot of independents out there” — but also many segments offering opportunities, Romans said.

While pointing out the difficulty smaller operations would have both in selling and running a business as the consolidation curve matures, Mewes did like Romans point out that MSO market share wasn’t absolute, with two-thirds of the $30-plus billion in revenue going to independents.

Still, he argued that smaller shops must either have impeccably efficient operations and/or a niche core competency, sell out, or reinvest in the business and grow.

Besides predicting the fifth consolidator, Romans offered two forecasts for the regional and national MSO landscape through 2020. In a “moderate” Scenario No. 1, the combined MSO segement controls 41.49 percent of the revenue. In an “aggressive” Scenario No. 2 in which bullish predictions from that segment pan out, the MSO community has 47.20 percent of the market. At 60 percent of the market, the industry will face “structural change,” he said.

Interestingly, some major insurers were among the more optimistic for smaller operators’ chances, both for survival and in staying on DRPs.

‎Progressive corporate claims repair network process Director Chris Andreoli said his company seeks to partner with “A-plus” independents and small MSOs. He doubted the company would seek a “one size fits all” approach and only use large MSOs. Progressive liked competition, he said.

“We don’t feel that size matters, it’s about the experience (for customers),” Farmers strategy manager and technical advisor Gerry Poirier agreed during the panel.

Clint Marlow, a director of Allstate, seemed to make a similar point during a discussion of how managers and culture can elevate one location over another.

Giants like Apple and Amazon deliver great customer service. But Stew Leonard’s competes like crazy in the Northeast with the Stop & Shop “behemoth,” Marlow said. Or take restaurants: Plenty of smaller restaurants compete with chains, he said.