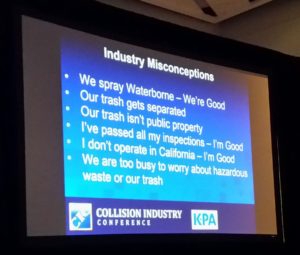 California collision repairers often conclude they’re safe from environmental regulations for the same reasons, but these misconceptions could get them and peers in other states in trouble, a representative of an automotive environmental compliance consultant said last week.

KPA client development engineer Jennifer Blake, a guest speaker at the Collision Industry Conference on Aug. 9, shared six common misconceptions the industry seems to hold. Drawing these erroneous conclusions could leave a shop open to thousands of dollars in penalties. Here they are:

I use waterborne paint, so I’m environmentally compliant.

That one doesn’t even make sense. It’s not like the EPA or any state agency only has a single regulation to enforce.

Body shop trash gets separated by the garbage company.

It doesn’t. The business must do its own separation of hazardous materials from the mundane trash allowed in a typical dumpster, according to KPA. The former must be put in one of numerous hazardous waste barrels, each limited to one particular category of waste, and picked up on a compliant schedule, according to the company.

Anything considered hazardous must be put in an appropriate hazardous waste barrel. You’ll likely need several barrels, separated by waste category. For example, separate barrels for solvent-based paint, waterborne paint, body filler, used oil, floor sweep, batteries (including tool batteries), light bulbs (including dash lights) and e-waste (think of all the computers on cars), etc., according to Barber and KPA.

Some of these items, like oil, are considered hazardous waste violations at a state-specific level only, while others are on the national federal radar, according to KPA. Shops must check both their own state and federal jurisdictions to ensure compliance.

Even a shop which properly separates its waste can be tripped up by some random passerby throwing hazardous materials in there, and Blake encouraged the audience to lock up their trash.

“It’s not yours anymore,” Blake said. Once you’ve put it out for collection, it’s considered public property in California, she said. Regulators can have their way with it.

Shop owners who say “‘My local inspector — we’re good'”; “‘I’m good with the county'” or feel like they’ve fixed their problems might be experiencing the “biggest misconception,” according to Blake.

The regulators you’re buddy-buddy with, “they all have a boss too,” Blake said. Or the California inspector is merely “pretending to be your friend,” she said

Blake said she attended one training session for environmental regulators. There, the military and California Highway Patrol taught interrogation tactics and a “cop-like mentality,” including “how to befriend you” so you incriminate yourself.

“They’re a completely different person to their boss,” she said.

Plus, they’re not the only one you have to worry about. See the next misconception:

I’m not in California.

“We’re more on the stringent side,” the San Francisco-based Blake acknowledged, but she warned that other states “follow suit.” Being across the border might not save you. For example, she said the East Coast also has stringent regulations, particularly coastal areas trying to protect their piece of the ocean.

The other threat: Every county has a district attorney in charge of enforcing local federal law, Blake said. “That’s where we’re seeing the action,” she said.

Plus, there’s the Environmental Protection Agency, and everyone in the country still must meet the baseline national regs they establish, Blake noted.

Collision repairers are a subset of a broader automotive industry, one of the largest in the country and thus a juicy target, according to Blake. Tell a county cop at a traffic stop that you’re too busy to pay attention to the speed limit. See how that goes. Now multiply that by a government agency — particularly one tasked with assuming the entire planet is at stake.