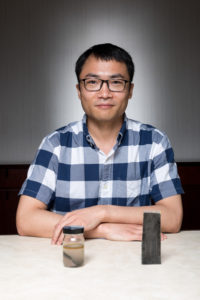 Georgia Tech last month announced in a university magazine researchers have created a scalable process of reclaiming nearly 100 percent of the carbon fiber in certain composites — which could cut the cost and grow the appeal of automotive carbon fiber.

Carbon fiber-reinforced polymer, like many automotive composites, features reinforcing structures within a hardening resin matrix. It’s the same principal as rebar in concrete.

The Georgia Tech procedure works on the subset of carbon-fiber suspended in vitrimer epoxy. It dissolves the epoxy by soaking it in an alcohol solvent.

“Once dissolved, the carbon fibers and the epoxy can be separated and used in new applications,” Georgia Tech wrote July 21 in its magazine Research Horizons. “This method we think could have a lot of immediate industrial applications, with lots economical and environment benefits,” former Georgia Tech postdoctoral researcher Kai Yu, now a professor at the University of Colorado-Denver, said to the magazine about his research, published earlier in July by Advanced Functional Materials.

“It’s very easy to operate, so there’s no limit to the size,” he said. “It can be easily scaled up.”

Its unclear what proportion of automotive carbon fiber — if any — uses vitrimer epoxy, which is different from what the piece calls “traditional carbon fiber.”

“The polymer matrix (in traditional CFRP) is usually crosslinked, just like the rubber, and it can’t be simply melted; it’s very hard to strip away the polymer to reclaim the embedded carbon fibers, which are more valuable to recycle,” Georgia Tech professor Jerry Qi told Research Horizons.

“Vitrimers contain dynamic bonds that can alternate their structure without losing network integrity under certain conditions,” he said. “We let alcohol, which has small molecules, to participate in the network of alternating reactions, which effectively dissolved the vitrimer.”

Recycling is important not just from a cost perspective. Different materials industries competing for automotive body space tout their recyclability on environmental grounds — which on top of the feel-good benefits keep regulators happy.