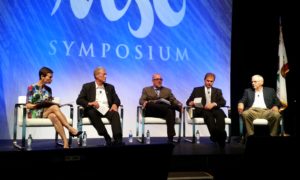 Though the explosion in technology has created new friction between shops and insurers over issues of cost, safety, liability and customer service, this month’s NACE and CIC events suggested some opportunities for collaboration.

We’ll present a few possibilities over the next few days. Today, we look at the idea of estimating when the vehicle will be ready for the customer everyone’s trying to keep happy.

Both insurers and repairers seemed to have hit upon common ground at a 2015 CIC, when audience members and a panel of both industries seemed to conclude customers could have a more accurate delivery date if an ETA wasn’t provided until after the teardown and parts logistics were worked out.

Hopefully, this one could be low-hanging fruit for the two industries.

Moderator Marcy Tieger, principal of Symphony Advisors, asked four leading insurers Aug. 11 about a recent JD Power study that found 92 percent of customers were satisfied with an auto claim if the vehicle was fixed correctly (an important if!), but only 72 were satisfied with the accuracy of the completion date estimate.

CCC director and lead analyst Susanna Gotsch’s research, first presented in Property Casualty 360 and later in the 2016 Crash Course, found cycle time is actually less important to the customer than being kept informed of the repair’s progress. That would seem to bear out the idea of accuracy rather than rushing to give the customer a delivery date.

Farmers strategy manager and technical adviser Gerry Poirier said during that MSO Symposium panel that Farmers had discussed with partners if there was a benefit to doing an estimate up front if a car was coming into a shop. Often, he said, the answer was no.

But if an ETA was given post-teardown, “you’re a lot closer” to the actual date, Poirier said. He said Farmers was working on that, and it would likely increase efficiency and result in fewer supplements.

Collision repair professionals seeking advice for reducing cycle time and growing customer satisfaction should check out “How to find ‘Open Capacity’ in any Body Shop Uncovering Your Hidden Factory” with Mike Lanza of Sherwin Williams, “Repair Plan Like you Mean It” with Michael Giarrizzo Jr. of DCR Systems, and  “Optimizing the Consumer Experience” with Michael Callahan and Will Shen of CCC. The three sessions are part of the Society of Collision Repair Specialists’ Repairer Driven Education Series from Nov. 1-4 during SEMA. Register here.

Allstate claims director Clint Marlow agreed that the first time a policyholder receives a delivery date estimate, you run the risk of “resetting expectation” and irritating them when parties closer to the actual car give them a new one.

He suggested that car rental companies share real repair times data, and this would be used to make accurate predictions.

As he did with another statistic, Chris Andreoli, Progressive corporate claims repair network process director, said his company’s data differed from JD Power, and it hit target completion dates 93 percent of the time. Don’t use a rote formula, he said. Instead, Progressive staffers have discussions about scheduling with collision repairers, and spend more time determining the date prior to giving it.

State Farm claims director Russ Hoffbauer agreed with his colleagues, and noted Poirier’s concept of a realistic timeframe. An inaccurate one really seemed to upset the customer, he said.