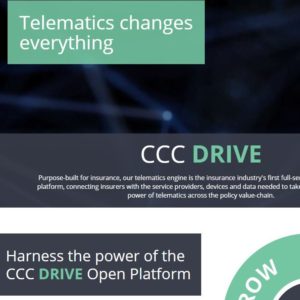 CCC announced Wednesday a new telematics platform which could allow a vehicle to automatically notify an insurer when a crash occurs — and help the underwriter determine what happens next.

The new DRIVE system, an example of what appears to be a looming industry trend, raises concerns about “steering” and instantaneous “desk reviews” but also carries the potential to help shops and customers.

It also raises the stakes of the competition between insurers and automakers to manage their mutual customer after a collision, as well as the auto body shops and physicians who work with them down the line.

“Powered by the CCC DRIVE™ telematics platform, these offerings include electronic crash detection, automatically initiated first notice of loss (FNOL), and predictive solutions that will inform real-time decisions including vehicle repair versus replace, preferred method of inspection (based on carrier guidelines), and injury triage,” CCC wrote Wednesday. “The CCC DRIVE platform is designed to collect driving data from any source and then seamlessly integrate important pre-impact and impact data with CCC’s solutions to help users make more informed and proactive decisions earlier in the claims process.”

Essentially, the car — or a smartphone or OBD-II plugin — does exactly what a service like OnStar would do, but for an insurer. Smartphones with accelerometers and GPS can or will already track the kind of driving data collected by an OBD-II plugin like Snapshot, and if an insurer partners with an OEM, even more collision information from vehicle sensors might be available to inform the claim.

For a vehicle owner that couldn’t afford an OEM solution or has an incompatible vehicle but is injured a collision, it’s certainly attractive to have rescue authorities contacted on one’s behalf. Even for an uninjured policyholder, it’d be nice to hear a friendly voice at a moment of crisis. That shouldn’t be dismissed lightly.

“Our CCC DRIVE platform is designed to address the broad spectrum of telematics use cases, including marketing, underwriting, and claims, giving insurers a single, flexible solution to address their telematics pursuits,” CCC product management Vice President Greg Bannon said in a statement. “When it comes to applying telematics to claims, the only way to deliver value is to make the data actionable for insurers. Current users of CCC’s solutions will see tremendous benefits because of our network and data capabilities, which put driving data into context to enable real decisions, in real time. This creates tangible benefits in the areas of efficiency gains, cycle time improvements, and increased policyholder satisfaction without disrupting the existing workflow of insurers.”

At the scene, it’s welcome and convenient. After that, perhaps not so much.

If the accident isn’t severe, the insurer still knows about it, which could impact the rates for a policyholder who was going to pay for the whole thing out-of-pocket and not file a claim. And then, we come to concerns about steering — sending a customer to the cheapest shop, not the best one — and predictive analytics diagnosing the injuries or extent of the repair. That’d be a nightmare for collision repairers, doctors and the policyholder if not managed appropriately.

“Preferred method of inspection” and “automatically initiated first notice of loss”: At the scene of the collision, the owner of an undriveable vehicle is shaken up. There’s zero time to do research. An soothing call center offers to send a tow service and get the car to a body shop — or at least to an inspection station. There’s a caveat, assuming you’re in a state that even has shop choice laws, that the driver can pick someone.

For driveable cars, this might be less of an issue — though the policyholder is still immediately in contact with an insurer instead of filing a claim when they get around to it and have done their own research.

Collision repair professionals seeking advice on the future of referrals should  check out “Marketing To Your Referral Sources: The Business of Acquiring Business Leads” with Frank LaViola of Collision Industry Marketing — and directly relevant to this discussion, “Competing with the Talking Car – Virtual Steering” with Steven Feltovich of Sherwin Williams. The four sessions are part of the Society of Collision Repair Specialists’ Repairer Driven Education Series from Nov. 1-4 during SEMA. Register here.

Either way, the customer ends up at a DRP shop, which by definition offers concessions to an insurer in exchange for volume and doesn’t want to lose insurer business. They’re not necessarily going to do a worse job than a non-DRP shop would, but there’s potentially a conflict of interest. (And reinspections haven’t always reflected well on their quality.)

If you have an insurer and OEM electronic crash detection service in your vehicle, you literally could get simultaneous calls from both trying to help you and send you to separate repair networks. (Emergency services gets two 911 calls, but they’re used to that.)

Then there’s the issue of an out-of-pocket crash which can’t be handled “off the books” any longer, as well as law enforcement being alerted even to a minor incident.

“Vehicle repair versus replace”: This one raises a huge concern — it’s “desk review on steroids,” to paraphrase Mike Anderson.

Photo estimating is already flawed enough, missing thousands of dollars worth of damage and potentially short-paying a customer with an immediate settlement offer. This one could be even worse if the predictive model is flawed — and we all know from the recent financial crisis and the Long-Term Capital Management story how well expecting a model based on past results to predict future performance works.

Think of how well labor rate surveys have allegedly reflected actual labor rates and you can see the “garbage in, garbage out” potential of past data being used to calculate unrelated future repair severity. It’s actually quite insane, given that cars are changing their cosmetic and internal structures every year — data from a 2013-16 Ford Fusion, for example, will not reflect front-end damage to a 2017 Fusion. At least with medical injuries, the human body hasn’t changed much in at least 50,000 years — but advances in medicine are changing constantly, too, so that damage might not be truly modelable from past results. “Preferred method of inspection” and “automatically initiated first notice of loss”: There are signs that insurers are taking seriously OEM certification and the need for shops fluent in a modern vehicle repair, and some are partnering with automakers to be the insurer of choice.

If insurers are making customers legitimately aware of these concerns, it could be a huge benefit for OEM-certified shops and any shop who knows what they’re actually doing versus the lowest-common denominator collision repairers who haven’t checked a repair procedure or upgraded in years. Some of these will be DRP, some of these shops won’t be DRP.

It can’t be arbitrary, though, or run afoul of shop choice laws. For example, saying a shop is certified by Tesla is a fact. Implying that a shop not in a DRP isn’t Tesla-certified without looking it up is misleading on both levels. (Although the latter is being debated in federal court right now.)

And customers might welcome getting the claims process set in motion immediately — though data has indicated that they care more about repair quality and staying informed rather than cycle time.

The ability of an insurer to have such data might better inform third-party claims — “yeah, our guy did it, and we owe 90 percent” — as well as track hit-and-run drivers, which is a benefit to society and the victim of the collision despite privacy concerns.  To the latter — certainly a big concern — we can feel a little sympathy for the policyholder who has the police alerted to a minor fender bender and gets a ticket. We don’t feel bad for the hit-and-run driver whose insurer gives the data to police upon subpoena. “Vehicle repair versus replace”: Some shops might disagree, and want the extra couple of days of business, but others will welcome the potential for a total loss to be determined immediately based on the predictive analytics.

There’s also the opportunity for customers to be safer if these models determine on the spot that a car is undriveable rather than simply ask an customer who doesn’t even know how to change their own oil if the car is safe to drive or not.

Finally, insurers who more appropriately understand the complexity of modern vehicles — energy flow, scans, even side airbags — might develop more appropriate models to better price the risk and their premiums accordingly. Their competitors try to cheap out on repairs, only to have supplements and lawsuits prove them wrong.

This idea also carries the potential to prove fraud and disprove misconceptions of “it doesn’t look that bad,” both of which will foster more trust and better dialogue between insurers and repairers, as well as ease the balking at higher repair bills. If an insurer doesn’t lose as much money to fraud and can better detect if a shop and customer is lying, it might be more receptive to what honorable shops have to say.

(Separating fact from fiction in medical claims resulting from an accident is a different can of worms since you can’t actually see pain and suffering the way you can see a diagnostic trouble code or OEM repair procedure — nor can you total-loss a human being. We don’t envy health insurers, patients, and doctors fighting over this kind of thing.)

Finally, accurate predictive analytics could help collision repairers with scheduling and starting parts orders. If the damage indicates certain parts might be necessary, a shop can start ordering them and cut cycle time. A busy shop could calculate the best time to start work on the vehicle — or refuse it outright if they’re socked in with, say, hail claims.

There is a fascinating, exhilarating and terrifying new world coming, and shops, OEMs, insurers and customers all need to be ready and ensure everyone is treated fairly — the customer most of all. Get thinking, and get talking.

Featured images: CCC announced Wednesday a new telematics platform, the home screen of which is shown here, which could allow a vehicle to automatically notify an insurer when a crash occurs. (Screenshots from www.cccis.com)