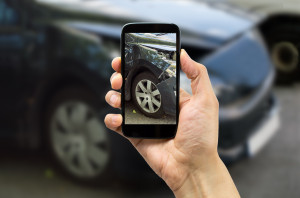 Mitchell’s partnership with AI crash photo analysis firm Tractable will be used in a collision claims triage role, the information provider said Wednesday, providing more details as well about the photography and data set used to make these decisions.

Though Mitchell is saving most of the specifics for a big reveal next week, sales and service-repair Vice President Jack Rozint said Wednesday that the collaboration won’t result in an automated form of the human photo estimating repairers criticize as inadequate. Tractable’s machine isn’t going to spit out a specific, final value like “$279” based on images alone, according to Rozint.

Instead, as Tractable’s website indicates, Rozint confirmed Mitchell’s partnership with the startup would be limited to assigning crashes to broad triage categories based on photos. He said it was too early to say what kinds of categories the AI would divide collisions. (For example, light/medium/heavy damage/totaled, driveable/nondriveable, etc.)

“Whenever your policyholder is involved in an accident, it is critical to quickly assess whether the car is repairable or not, and dispatch it to the right workflow the very first time,” Tractable’s site states. “But current processes rely on dozens of subjective questions and are not accurate enough. Instead of asking your customer to answer questions at a moment of stress, simply ask them to take a few images, or assign this to the tow truck driver. Our AI reviews photos in real time, provides superior triage performance based on damage severity, and allows you to accurately dispatch the claim to salvage, repair or appraisal.”

Rozint said that while photo analysis had its place, “there’s no way you can write” an estimate that reflects the true damage to a car without an up-close inspection by an appraiser or shop performing a teardown.

The technology was “not replacing the human element, but supplementing the human,” he said.

The concept of predictive analytics is just one of the factors poised to disrupt collision repair. Professionals seeking more advice and predictions on the future of the industry should check out “Competing with the Talking Car – Virtual Steering” with Steven Feltovich of Sherwin Williams, “The Future Landscape of Accident Repairs” with Dave Gruskos of Reliable Automotive Equipment, “Structural Repair and Materials for 2016 and Beyond” Ken Boylan, CHIEF Automotive, and “2020: The Future of Staffing – How to find, train & pay qualified people” with Mike Lanza, Sherwin Williams. The sessions are part of the Society of Collision Repair Specialists’ Repairer Driven Education Series from Nov. 1-4 during SEMA. Register here.

As it relied on an extensive Mitchell data set of claims with varying levels of photo documentation, Tractable’s AI would be able to handle a diverse series of photos, according to Rozint. Users wouldn’t be locked into a uniform set of angles and distances.

This made it flexible enough to accommodate a customer taking a couple of photos in an app from a crash scene to an adjuster or repairer taking multiple detail shots under better lighting, he said.

Tractable’s AI isn’t limited to simply analyzing images in a vacuum, Rozint said. Its thought process could also consider other reported variables like the presence of oil leaks or windshield cracks, he said.

As noted above, Tractable’s AI “learned” from Mitchell’s gigantic historical data set of claim photos and estimates. Rozint said the computer uses both instances where the claim was finished in a single estimate as well as the final bill in repairs with multiple supplements and estimate iterations.

This raises the question of how reflective of the actual damage the one-take, no-teardown estimates were and what the potential effect could be on Tractable’s conclusions. It also begs the question of how complete any of the estimates were, given troubling assessments of collision repair education and OEM repair procedure usage. But the sheer volume of Mitchell’s data probably evens itself out somewhat, and it all has value to the AI’s overall development.

“We’re stepping up our donations of software and finance,” he said.

Rozint also called training “absolutely critical” and said the company was increasing its support for that as well.

Finally, Rozint said the company was working with automakers to add more OEM procedures and data to Mitchell software, and he noted the company’s groundbreaking partnership with Toyota to incorporate repair procedures into the actual estimating process.

As for the prospect that OEMs could introduce new materials or technology unanticipated by the AI’s model, Rozint agreed there were limitations. But lessons from early adopters can inform the computer’s decision making on future models, he said. (For example, using aluminum Ford F-150 repair bills to gauge when another OEM’s aluminum truck would likely be a total loss.)

We’ve pointed out some potential complications above, but make no mistake, there’s also an exciting potential for the AI’s lessons to perform far more accurately — and neutrally — than a human desk reviewer.

A photo which “doesn’t look that bad” to a desk reviewer seeing hundreds of images a year might look like a total loss to a Tractable’s computer that’s reviewed thousands or millions of post-teardown estimates. As with facial recognition or fingerprint matching software, Big Data computers like Tractable’s will see patterns a human would take a lifetime of training to recognize if ever — assuming they’ve been taught correctly. Unlike a desk reviewer whose job depends on pleasing a particular insurer, the machine also doesn’t care what its user thinks about its answer.

Asked about the machine’s ability to catch hidden or understimated damage, Rozint said he couldn’t reveal anything until after the conference.

Rozint stressed that Mitchell wasn’t disclosing individual shop data or allowing comparisons between shops in a breach of privacy. Tractable was using aggregate data pertaining to the industry as a whole, he said.

“We’re very careful about how we access that data,” Rozint said.

He also said he couldn’t comment on whether the Mitchell partnership would involve Tractable stated capability scan estimates and images for fraud, but “you could draw the logical decision.”