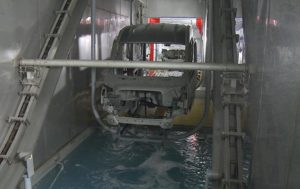 Auto body shops should understand how OEMs address corrosion protection in the factory — and how the automakers might sometimes want aftermarket repairers to use a different technique, according to 3M experts.

3M applications specialist Dennis Keicher advised shops consider the kind of “pretty extensive” corrosion protection OEMs conduct, and think, “Can you do anything like this in your shop?” If not, then you’ll need to pay close attention to the substitute the OEM has given you.

“Maybe that’s not what the OEM wants you to do,” Keicher said of the factory-level procedures, and the automaker will issue bulletins or repair procedures detailing what is required at the aftermarket level.

This aftermarket repair technique should be found in the repair procedures itself — not by observation of the original part, 3M senior technical service engineer Shawn Collins agreed.

Collins, who will with Keicher teach “Maximize Quality Control to Minimize Re-work and Liability” Nov. 2 during SEMA (Register here.), said that technicians were trained to follow the OEM, and sometimes, the repairers “take that a little too far.”

For example, technicians will notice the welded-on panel they’re addressing wasn’t seam-sealed on the original car and “they will leave it un-seam-sealed,” Collins said.

“They’re understandably thinking they’re doing the right thing,” he said. But because a repair shop can’t dip the entire car in a corrosion protection bath like the OEM could, “we need to seal that seam.”

Collins said that insurers might question why a shop put seam sealer on a part that didn’t originally have it, but most have been receptive once the auto body shop shows them the OEM documentation supporting it.

“There are bulletins exactly like that out there,” he said.

Another instance of a factory-shop distinction might be a situation when a repairer is encapsulating a door panel with a 360-degree hem flange, according to Keicher. At a manufacturing plant, the part might be completely dipped in zinc phosphate — an impossibility for a collision repairer. So manufacturers will demand a cavity wax, be it an OEM or aftermarket door, Keicher said.

That seals the inside, but seam sealer on the outside is also necessary here too, according to Keicher. After that, it’s simply a matter of painting it adequately.

If the metal part corrodes because of its own defects, then it’s obviously a part manufacturer warranty issue, not a shop warranty issue, Keicher agreed. But if there aren’t any issues with the part, either an OEM or aftermarket version should last the life of the vehicle without corroding “if you take the steps” outlined by the manufacturer to protect the metal, he said. Omit the necessary substrate protection, and the repairer could be on the hook for corrosion related to their own mistake.

OEMs use a lot of aluminum corrosion protection, and you’ll have to do the same.